Before the lockdown, Kartik Aaryan was shooting for his next film Bhool Bhulaiyaa 2 in Lucknow. He also has Karan Johar’s Dostana 2 opposite Janhvi Kapoor in the pipeline.

Bollywood celebrities are under self-quarantine these days as coronavirus is increasing rapidly. With 21-days nationwide lockdown, life of the people has come to a standstill. As celebrities are homebound, they are taking up different activities and household chores to spend their day. While Katrina is into cleaning the house and fitness, Shah Rukh Khan has been learning to play guitar. Another actor Kartik Aaryan is also spending his time helping his mother in household work. Lately, the actor shared a video in which he was seen washing the dishes.

Kartik Aaryan shared a video of himself washing utensils and wrote alongside, "Kahaani Ghar Ghar Ki.... #Repost @dr.kiki_ Dont mistake this for Quarantine This is the usual scene at home @kartikaaryan." As soon as he shared the video, TV czarina Ekta Kapoor dropped a comment saying 'naaice.' To which our mama’s boy replied, “My mom is asking for a sequel.”

Kahaani Ghar Ghar Ki.... #Repost @dr.kiki_ Dont mistake this for Quarantine This is the usual scene at home @kartikaaryan 😘 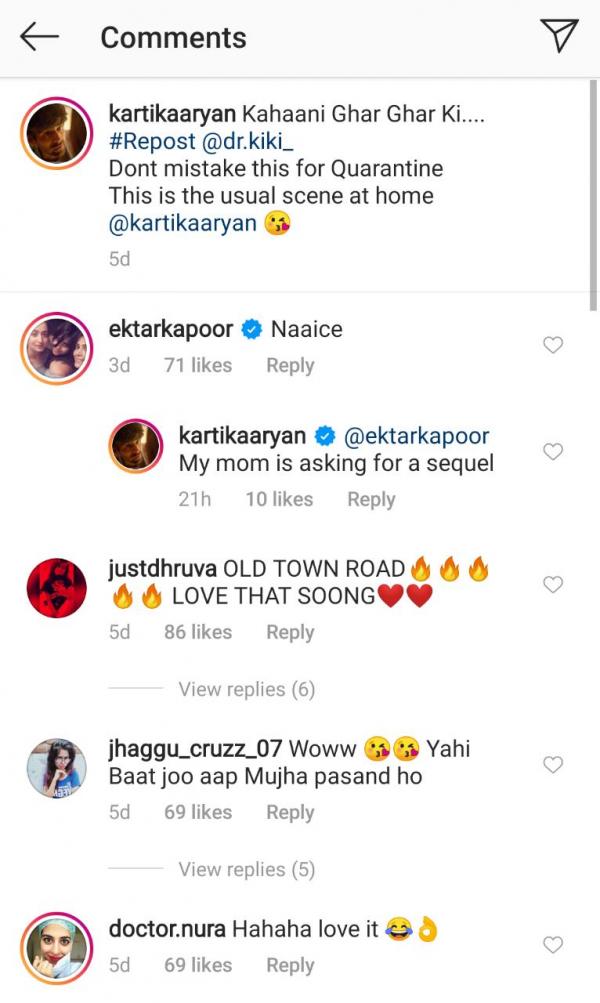 While Kartik is asking for Kahaani Ghar Ghar Kii sequel, fans are already up for the treat as Doordarshan has brought back all the popular 90s shows on TV. From epic drama Ramayan, Mahabharat to Shah Rukh Khan's Circus and Byomkesh Bakshi, fans are enjoying them all on their TV screens once again.

Earlier in the day on Friday, Union Minister of Information and Broadcast Prakash Javdekar had announced the return of Ramayan and Mahabharat after huge public demand. The shows will air on DD national twice daily. While Ramayan will air at 9 am-10 am and 9 pm-10 pm, Mahabharat will telecast at 12 noon-1 pm and 7 pm-8 pm.

Kartik Aaryan has become filmmakers favorite as much as he is of the viewers. Before the lockdown, he was shooting for his next film Bhool Bhulaiyaa 2 in Lucknow. He also has Karan Johar’s Dostana 2 opposite Janhvi Kapoor in the pipeline.