Veteran Bollywood couple Hema Malini and Dharmendra have become grandparents again. Their younger daughter Ahana Deol Vohra has been blessed with twin baby girls on November 26th. Ahana and her husband Vaibhav took to their social media to share the news with their friends and fans. They also shared the names of their daughters- Astraia and Adea Vohra. On her Instagram stories, Ahana wrote, "Some miracles come in pairs. We are blessed to announce the arrival of our twin girls, Astraia and Adea." 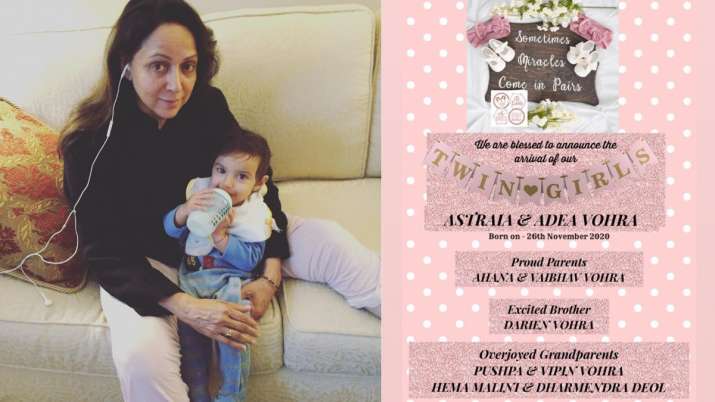 Ahana and Vaibhav already have a baby boy named Darien Vohra. The duo got married in a big fat Indian wedding on February 2, 2014 and welcomed their first child in 2015. Grandmother Hema Malini loves spending time with her grand children. Along with Ahana's son Darien, she loves to pamper her granddaughters Radhya and Miraya from elder daughter Esga Deol.

Earlier, talking about her grandkids in an interview, Hema Malini had revealed how her grandkids are always after her phone and lipsticks. She had said, "Lipstick nikaal nikaal ke mere haathon mein lagati hai, she wants to even put it on my face. When I’m doing my make-up in the morning, she must sit on my lap. She also wants my purse. It is because of her that I’m carrying a small one. I also remind myself to keep the purse super-light."

Talking about Darien's fascination with phones, she added, "He looks for it, takes it and runs off. He wants to see cartoons on it because his mother doesn’t let him use the phone.."