Deepika Padukone during coronavirus lockdown claimed that Katrina Kaif stole her idea of a new Instagram post which was a video of washing utensils. Here's how Sooryavanshi and Arjun Kapoor reacted.

The coronavirus pandemic has left everyone locked down at their houses, including our Bollywood celebrities. In the wake of the same, many actors and actresses are coming up with their hidden talent on social media. And this isn't enough, there are many who are giving us insight into what their life looks like now without any house help--washing clothes and utensils. Similarly, Katrina Kaif also posted a video doing the same but now she has been accused of plagiarism by Deepika Padukone who has claimed that the Bharat actress has stolen her idea of a new Instagram post. Well now, the Sooryavanshi actress has responded to the same along with Arjun Kapoor.

Katrina, a few days back, posted a video of herself washing utensils. She captioned the video as, "Since the house helps are also practicing self-isolation, Izzy and I have decided to take turns to do the washing up. I thought I would do a little professional tutorial." The same video was shared by Deepika with a caption that read, "I regret to inform you that Season 1:Episode 5 stands cancelled because @katrinakaif stole my idea!Hmmff!!! #PlagiarismInTheTimeOfCovid19."

Katrina reacting back to her wrote, "Hahaha ......Got the rights from Rupali my trusted aide (and house staff )Haha stay safe .... love u guys." Not only this even Arjun Kapoor had a request to make as he asked DP, "@deepikapadukone can we see what’s for dessert at ur lovely house in the time of isolation…" 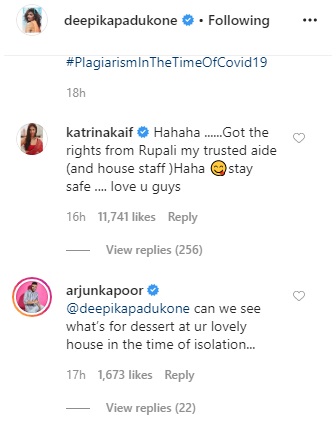 Deepika has previously been sharing pics of herself enjoying isolation by drinking a juice, taking care of her skin, working out and spending time with her husband Ranveer Singh.

Meanwhile, Katrina these days is on a cleanliness mission and is also working out at home since the whole country is on lockdown. She posted a video of herself brooming and wrote, "Day 21-One day at a time guys.......we all gotta do our part ........ m apparently @isakaif part is to give commentary and pro tips while seated Gotta mix it up ..... this is seriously good exercise btw #stayhome #helpoutathome."

Have a look at Katrina working out:

Meanwhile, the whole country has been on a lockdown as a precautionary measure announced by the Prime Minister Narendra Modi.