Salman Khan, the Bhai of Bollywood has recently shared a shirtless picture on his social media account. Here's what Varun Dhawan has to say about this picture.

Salman Khan and his signature way of wooing the fans by removing his shirt is something we all can swear by. No event is complete when Salman Khan is not asked to go shirtless as the fans worship their favourite star. He went shirtless for the first time in the year 1998 for the movie 'Pyaar Kiya To Darna Kya.' The special song 'Oh Oh Jane Jaana' still beats in our heart every day and night. Salman Khan played guitar and went shirtless to set the trend for millions of fans out there. listen to the song here

Recently, Salman Khan recalls his 'Oh Oh Jane Jaana' days and goes shirtless while chilling at home. The actor posted a shirtless picture on his Instagram account and sets the feed on fire. All the fans sing in praise of 'Bhai of Bollywood.' Salman Khan wrote, 'Chilling and watching the news Swachch Bharat Fit Bharat.'

As the results of Lok Sabha election 2019 are quite clear, Salman Khan also dropped a hint of how he spent his day chilling at home to see what's going to take place. Like a common man, Salman Khan was seen hooked up with the television to stay upgraded about the proceedings in the Nation.

Seeing Salman Khan without a shirt is a dream come true. Actor Varun Dhawan drops in the coolest comment on Salman's post and said, "Bhai just turned 18." Varun Dhawan compared Salman Khan o that of 18-year-old. This also signifies how fit Salman Khan at the age of 50 too. Here's what Varun Dhawan and other celebs have to say while praising him. 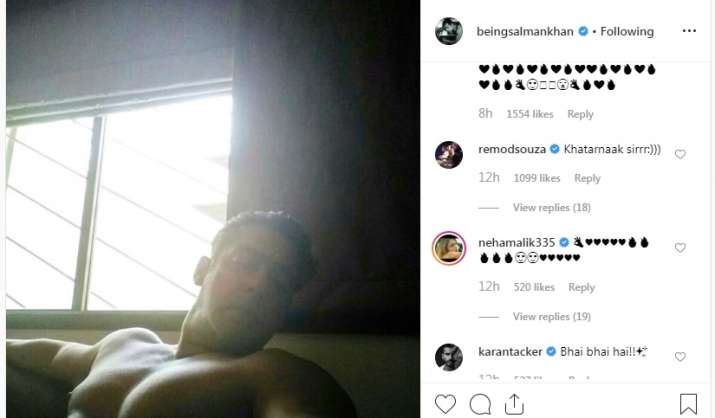 On the work front, Salman Khan has been really busy these days. He has been busy promoting Ali Abbas Zafar's Bharat which is set to release on June 5, 2019. The movie stars Katrina Kaif, Jackie Shroff and even Sunil Grover. Besides this, he will start shooting for Dabangg 3 laong side Sonakshi Sinha. The movie is set to release in December 2019. No just this, he will be seen sharing the screen space with Alia Bhatt in the movie Inshallah.