Bajirao's (Ranveer) bravery and Mastani's (Deepika) mohabbat are the highlights of the latest magnum opus from Sanjay Leela Bhansali. The love and passion that the two share can give you an adrenaline rush that is difficult to resist. The director, with his creative vision, brings alive an epic saga on the silver screen in his own grand way.

The movie opens establishing Bajirao Ballal's warriorship, something that has won him the prestigious title of ‘Peshwa' after the death of his father Balaji Vishwanath.

The story moves on, narrating the battles fought by Bajirao and his relation with wife Kashibai.  His life takes a turn when King Chatrasal's daughter Mastani approaches him seeking help to protect Bundelkhand from Mughal emperor Muhammed Khan Bangash.

Bajriao, impressed with Mastani's bravery, agrees to help save the kingdom from the Mughals. It is at this point that love strikes between the two and Chatrasal offers Mastani's hand to Bajirao. Upon reaching Pune, Mastani (born to a Muslim Persian) is subjected to severe humiliation as the Maratha kingdom refuses to accept a ‘Muslim' bride for the Peshwa. Drenched deep in her love for Bajirao, she withstands everything.

Bajirao, fighting against all odds, gives her the status of second wife but the ordeals never end for the two. The family and society's exclusion never bothers him and he maintains Mastani's dignity saying “Bajirao ne Mastani se mohabbat ki hai aiyyashi nahi”.

When Kashibai (Bajirao's first wife) comes to know about Bajirao-Mastani, she is left heartbroken but stands with him throughout.

True to his style, Bhansali strikes the right chords with the sets and feel of the character. However, the screenplay could have been better as the film missed important battles fought by Bajirao. His win over Mughal ruler Nizam too could have been emphasized more. Nevertheless, this could well be Bhansali's grandest film till date; to the extent that his depiction of events look too dramatic and away from the reality – something that could impress his die-hard fans but deter others from the film's feel and character. 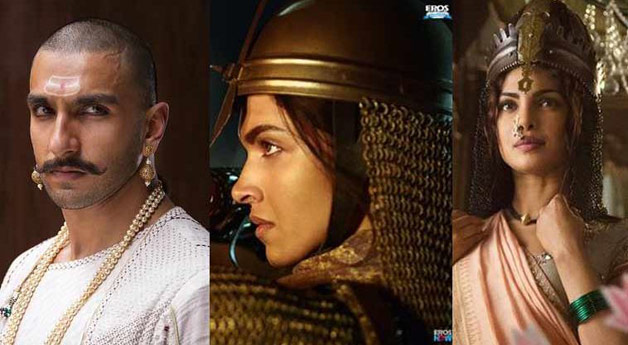 Ranveer, as Peshwa Bajirao, does full justice to the character. He is a courageous warrior on one hand, and a die-hard lover on the other. The comfort with which he carries off the Marathi diction and apt depiction of the Peshwa warrior's extraordinary talent in the battlefield is sure to win him laurels with this performance.

Priyanka Chopra is beautiful in her portrayal of Kashibai - a loving wife to whom her husband's happiness means everything. The short role looked significant, thanks to her convincing performance.

It is Deepika who takes the cake proving why she rules the roost as far as Indian actresses are concerned. Her portrayal of the beautiful warrior princess ready to die for love is nothing short of magnificent.

Despite being lengthy – yes, the film runs for over 2 hours and 30 minutes – the movie doesn't give you a chance to blink with its grand narration of events and a gripping script that could allow you to forgive some minor misgivings.

The grand sets, refined acting, powerful picturisation and apt direction reflect the hard work that has gone behind the making of this truly grand film.

No wonder, Sanjay Leela Bhansali has given sweat to this dream project of his. The music of the film weaves magic, enhancing the theme with sumptuous supreme supplementation.

Bajirao Mastani may not be a perfect movie but still has the potential to provide viewers a mesmerizing view into what could possibly be Sanjay Leela Bhansali's creative best.