Maruti Suzuki, India's biggest car manufacturer has managed to give its sales numbers a boost in the Diwali festive season. Maruti, which was struggling because of the overall slowdown in the auto sector has managed to rack up some solid numbers.

Maruti's sales figures for October are out and the country's largest carmaker has made a strong comeback from its low sales numbers from the last few months. As per the latest figures, Maruti Suzuki India (MSI) on Friday reported a 4.5 per cent increase in total sales at 1,53,435 units in October. The company had sold 1,46,766 units in October last year, MSI said in a statement. Domestic sales also grew 4.5 per cent to 1,44,277 units last month as against 1,38,100 units in October 2018, it added.

Sales of mini cars comprising Alto, WagonR and newly launched S-Presso stood at 28,537 units as compared to 32,835 units in the year-ago month, down 13.1 per cent.

Sales of compact segment, including models such as Swift, Celerio, Ignis, Baleno and Dzire, grew 15.9 per cent to 75,094 units as against 64,789 units in October last year.

Sales of utility vehicles, including Vitara Brezza, S-Cross and Ertiga, were at 23,108 units as compared to 20,764 units in the year-ago period, MSI said. 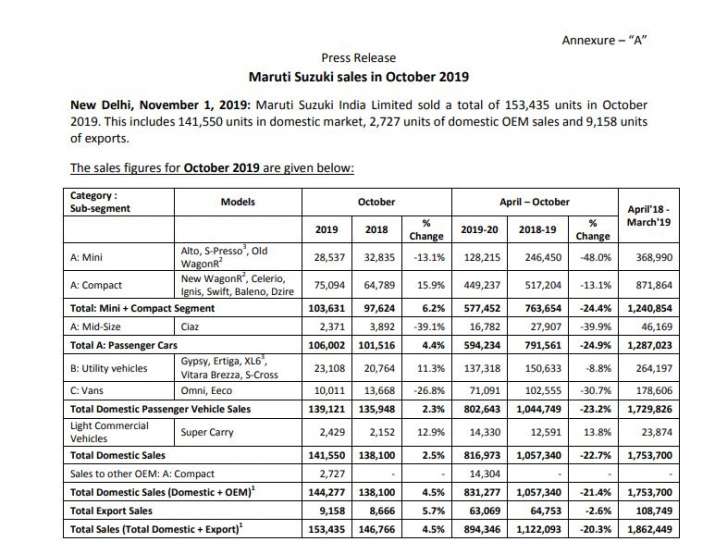 Exports in October were 5.7 per cent up at 9,158 units as against 8,666 units in the corresponding month last year, the company said.

Maruti's sales numbers were suffering from the overall downturn of the Indian auto sector in the last few months. In the month of September 2019, Maruti saw a YOY drop of 24.5 per cent in sales numbers.

The steps taken by Maruti in the Diwali season to revive the numbers -- which included major benefits schemes and 'Ghar Aya Tyohar' campaign -- have definitely resulted in a strong performance in the Festival month of Diwali.