A video of ace footballer Cristiano Ronaldo replacing coke bottles with water has been doing rounds on the internet. But did you know that before Cristiano Ronaldo, it was Bollywood actress Kareena Kapoor aka Geet in the film Jab We Met who snubbed aerated drinks? Watch the video here.

A video of ace footballer Cristiano Ronaldo replacing coke bottles with water has been doing rounds on the internet. The Portuguese star, who did not seem pleased with cola bottles at the Euro 2020 presser, moved them away and even said 'agua'  (Portuguese for water) asking people to prefer water over soft drinks. This coincided with a $4bn fall in the share price of the drinks company. Coke is a sponsor of the ongoing Euro 2020 in which the former Real Madrid star is leading Portugal.

But did you know that before Cristiano Ronaldo, it was Bollywood actress Kareena Kapoor Khan who snubbed aerated drinks? The actress who played the character of Geet in the film Jab We Met chose to pick water instead of cola.

In a particular scene of the film Kareena aka Geet gets down at the Ratlam station to get something to drink. She asks the vendor to give her a bottle of water and says, "Cola-shola sab apni jagah hai, par paani ka kaam paani hi karta hai'. She then gets into an argument with the vendor over the price of the bottle eventually missing her train.

Bollywood actress Kareena Kapoor also shared a post with the dialogue on her Instagram stories. Take a look: 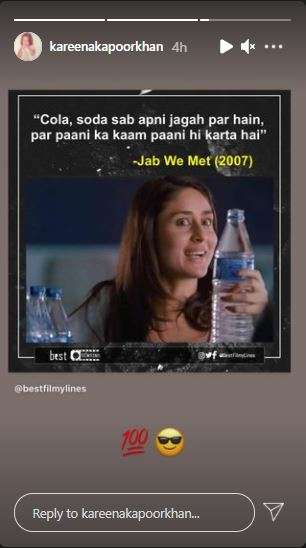 Meanwhile, a day after Cristiano Ronaldo removed two Coca-Cola bottles France midfielder Paul Pogba removed a Heineken bottle in front of him at a Euro 2020 news conference, sparking a furore among football fans.