For two nights in a row, Roger Federer came back from the jaws of defeat to inch closer to his seventh Australian Open title and an unprecedented 21st major.

Roger Federer does not hold a very good record in five-setter clashes, especially at Grand Slams. And that very statement takes us back to July 14 when he failed to convert two championship points before letting go of the opportunity to lift an unprecedented ninth at Wimbledon. Less than two months later, he lost to unseeded Grigor Dimitrov in quarterfinals of US Open last year. In three of his five-setters in majors, Federer lost all three - the quarterfinal defeat against Kevin Anderson in Wimbledon 2018 being the other. The last time he achieved a victory was in 2018 Australian Open final, defeating Marin Cilic 6-2, 6-7(5), 6-3, 3-6, 6-1 at the Rod Laver Arena. Two years later, Federer pulled off not one, but back-to-back classic victories at the same venue to qualify for the semis.

A mere tennis follower might shrug it off as a coincidence, statisticians might credit history for Federer has never lost a five-setter in Australian Open since 2017. But Federer prefered to use the word 'miracle' to describe the great escape on Tuesday.

The match seemed an easy affair for Federer after the first set which he won 6-3 against United States' Tenny Sandgren, who was playing his second quarterfinal match in Melbourne in three years. But Federer's smooth court coverage, especially his movement to the right, was reduced by his tight groin which even slowed down his service speed. The Swiss faltered and Sandgren captivated to grab the second set. 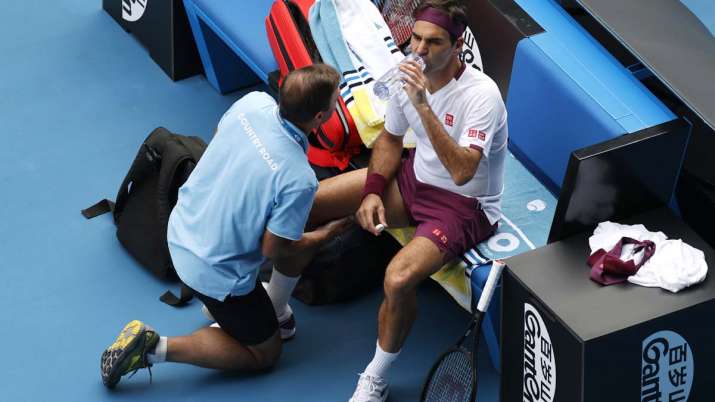 At 3-0 down in the third set, Federer took a medical timeout, and left the court for treatment. But little changed on his return. The American pounced on to take a 2-1 lead in the clash. Federer struggled to keep the American away with his serve while Sandgren raced away with points on his service games. At 3-2 in the fourth set, Sandgren had pulled off four aces and lost only three points in his last three service games.

The big-serving American continued his dominance to race away to gain three-match point opportunities in the fourth set. But by then Federer had loosened up and was beginning to find his rhythm. The 20-time Grand Slam winner, who had won six of his majors at the Rod Laver Arena, used all in his arsenal to pull things back on track while nervy Sandgren committed three straight unforced errors A fourth from the American gave Federer the game point which was followed by a forehand winner from the 38-year-old as he prevailed in the contest. But 10 minutes later their Federer's patience was tested again as Sandgren led the fourth-set tiebreak at 6-3, standing one away from what could have been the biggest win in his career.

But Federer believes in miracles, and miracles create 'faith'.

48 hours earlier, at the same venue, Federer was down 4-8 in the fifth-set tie-breaker against John Milman who had defeated him in US Open three years back. En route to incurring the trail, Federer looked exhausted and finished, but somehow managed to inspire himself and stayed strong to win six consecutive points and subsequent the round-of-16 clash. He himself was left in disbelief and found himself short of words at describing the phenomenal comeback. If 'miracle' it was, then 'faith' had made his place in his gameplan on Tuesday afternoon.

A netted backhand return from Sandgren left Federer at 4-6. An ace that followed made it 5-6. Still on one match point, Sandgren was on service, but a volley from Federer into the open court denied him the glory. But he quickly put things in his favour with an unreturned service. Federer then got Sandgren to net his sliced return and then powered down an ace to take an 8-7 lead before another unforced error from Sandgren took the game into the fifth set, denying the American as many as seven match points.

"You've got to get a bit lucky sometimes," said Federer in the post-match conversation. I was starting to feel my groin and my leg started to tighten up. I really don't like calling the trainer, you know, sign of weakness. I just said, 'I believe in miracles. There could be rain, there could be stuff.' It wasn't bad enough where I thought I was going to get worse, it was just stiff and tight (so he thought) just let him finish me off in style and he didn't do that, so just incredibly lucky.

"I think I got incredibly lucky."

Luck or not, here's how @rogerfederer assessed his performance to advance to the #AO2020 semifinals.#AusOpen pic.twitter.com/MK8UDBxT9o

"As the match went on I started to feel better again, the pressure went away and I just tried to play and again, got a little lucky to get the break. I served really well at the end so I don't deserve this one, but I'm standing here and I'm very, very happy."

While the miraculous escape had boosted Federer's morale, Sandgren had lost his focus and hope making an only mere impact in the final set. Amid the rising decibel level of the crowd inside Rod Laver Arena, Federer raced away to 4-2 lead, breaking Sandgren's service and then served for the match at 5-3 to script a sensational match at Melbourne Park.

This was only the second time in his career that he saved seven match points. He had done so previously in 2003, against Australia's Scoot Draper in Cincinnati Masters.

Federer will now gear up for a semifinal clash against defending champion Novak Djokovic, who defeated Milos Raonic in straight sets in the quarters. The Swiss maestro has to physically recover a great deal after back-to-back five-setters, but mentally, he will feel stronger than ever heading into the contest.