The Brazilian star used an Instagram post to criticize VAR officials for awarding United a decisive penalty in injury time after defender Presnel Kimpembe jumped and blocked Diogo Dalot's shot with his elbow.

Paris Saint-Germain striker Neymar has lashed out against a video assistant referee decision that opened the way for Manchester United to eliminate his French club from the Champions League.

The Brazilian star used an Instagram post on Wednesday to criticize VAR officials for awarding United a decisive penalty in injury time after defender Presnel Kimpembe jumped and blocked Diogo Dalot's shot with his elbow. 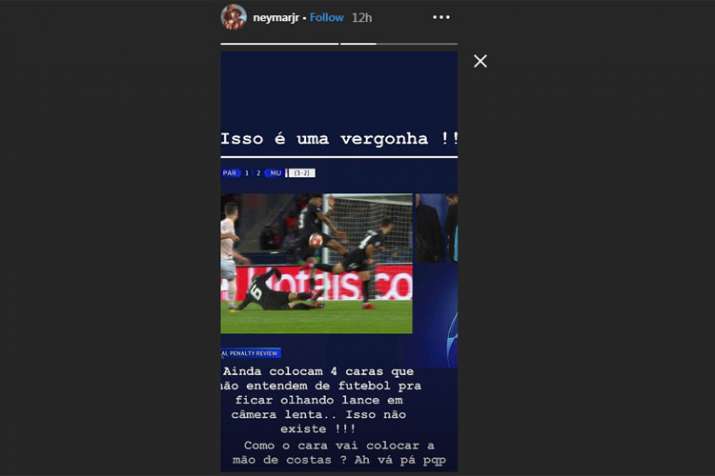 Marcus Rashford scored from the spot to secure a 3-1 win at PSG, allowing United to overturn its two-goal deficit from the first leg and secure a spot in the quarterfinals.

"This is a shame!" Neymar posted. "They put four guys that do not understand football to watch it in slow motion. This doesn't exist!" He also used an expletive against the VAR officials.

Neymar, who is recovering from injury, watched PSG's elimination from the sideline in the Parc des Princes stadium.

PSG's social media channels showed Neymar watching from near the bench in the final minutes, screaming and emotionally responding to the result.

Neymar returned to Paris on Tuesday after enjoying Carnival in Brazil, where he attended a series of events in Salvador and Rio de Janeiro during the four days of the celebrations.

The striker is expected to return to action in April from a metatarsal injury in his right foot, similar to the one he picked last year before the World Cup in Russia.