Bhaker managed to outscore Rahi Sarnobat, who managed 287 and finished on the 18th spot.

India's Manu Bhaker on Thursday finished fifth with a total of 292 in the 25m Pistol qualification (Precision) event. With scores of 97, 97 and 98, Bhaker was ranked fifth among the 32 shooters.

Bhaker managed to outscore Rahi Sarnobat, who managed 287 and finished in the 18th position.

Bhaker (292) and Sarnobat (287) will return tomorrow to take part in the Rapid event in the 25m Pistol.  The combined total of both the events will determine the final-8 for the medal event. 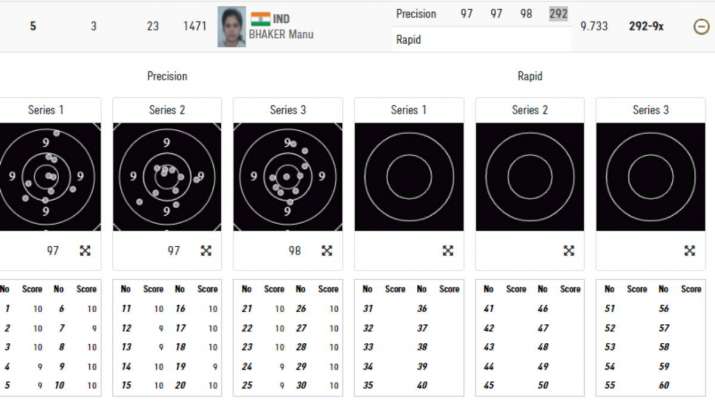 Serbia's Zorana Arunovic led the pack with 296 points, followed by Greece's Anna Korakaki who has 294.

In the third relay, Bhaker had a fine start as the 19-year-old shooter shot back to back 97s in the first two series.

With just two 9s in the third, Bhaker accumulated 98 points to climb into the top-5.

Bhaker came back strongly to score five 10s off her last five shots after three points in the second series.

Osijek World Cup gold medallist Sarnobat, who was in the first relay of 10 shooters, started the precision round with a 96 and followed it with a 97.

However, thanks to an 8 and a few 9s, she managed 94 in the final series of precision. Her total in the precision rounds was 287/300 which placed her 7th out of 10 in her relay.