Pep Guardiola's Manchester City has been handed a two-year ban from the Champions League by UEFA and as things stand, they're set to be out of Europe for the next two years.

There is no doubt in anyone's mind that in this seasons of UEFA Champions League's Round of 16, the biggest match is between Manchester City and Real Madrid.  The two giants from two biggest leagues in world football - La Liga and Premier League are ready to collide against each other in the quest for European glory on Thursday.

Whenever, two big teams like City and Madrid clash, the stakes are high and this time it will be the same. Pep Guardiola's City will be aiming for their maiden Champions League glory and on the other side, Zinedine Zidane is desperate to bring back the glory days of Real Madrid this season.

The pressure his high on Manchester City as they are almost out of the Premier League title race as they have not been consistent with their approach in their title defence this season and the two-year European Championship ban from UEFA has been a major setback for them. After an investigation that was sparked by leaked internal correspondence showing City overstated sponsorship revenue and masked the source of revenue from deals to tied to the Gulf nation in a bid to comply with Financial Fair Play regulations. Manchester City, however, may appeal the decision to the Switzerland-based Court of Arbitration for Sport.

With the uncertainty over City's participation in the next two seasons of UCL, this is the only chance for Pep's City to prove themselves. Despite playing dominating football in Premier League in the previous two seasons, City weren't able to lift the Champions League trophy. Guardiola's hunger to win the UCL title is not hidden from anyone. He has won two premier European titles, both with Barcelona and after that, he has struggled in the competition with Bayern Munich and City in the knockout games.

If City players turned their two-year ban into motivation, then there is a chance otherwise their habit of choking in the knockouts of UCL is not a new thing.

On the other side, Real Madrid are finally looking good this season after a dreadful 2019/20, where they were trophy-less and was eliminated in the Round of 16 of UCL by underdogs Ajax.

Last season, Madrid were nowhere near their best and were missing their star Cristiano Ronaldo, who left the club for Italian giants Juventus. After his departure, Madrid looked toothless, the energy from the Los Blancos was missing, they lacked goals that Ronaldo used to provide. But the story is not the same in this season as with Zidane's return, they are looking back on track.

Madrid are very much in the fight for the La Liga race this season as they are just two points behind defending champions Barcelona. Senior striker Karim Benzema is finally stepping up for them in front of the goals.

And every football follower knows that Real Madrid and Champions League is the 'love story' made in heaven. They are the 13-time UEFA Champions League winner, which surely makes them the King of Europe. 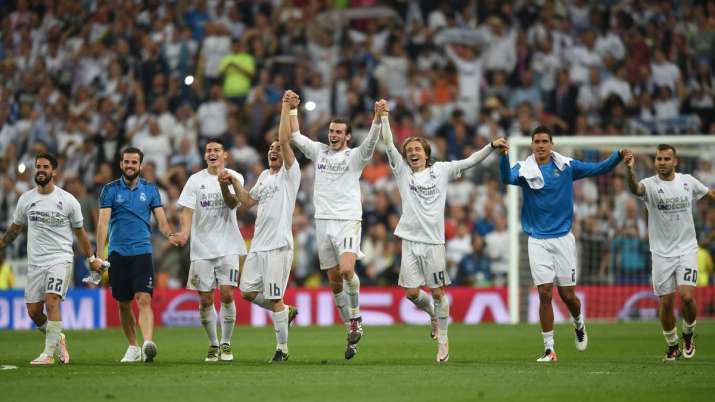 If City want to prove their worth then Madrid is the team they need to beat and it's never an easy task for anyone. Both the clubs have pitted against each other two times in the Champions League before and Los Blancos emerged victorious in both of them.

In the 2012/13 season, Madrid edged past City with 4-3 aggregate, while in 2016/17 season the clash was more intense with Spanish Giants knocking the Guardiola's team with 1-0 win in the home fixture after the goalless draw at Etihad.

This season City are struggling because of the flawed defence, while, Madrid's midfield is not up to the mark in the supplying the ball to the forwards. Raheem Sterling's inconsistent show will be a big concern for Guardiola.

Madrid will also be missing the services of Eden Hazard, who has been ruled out from the rest of the season with a fracture to his right distal fibula.

Both teams are second in their respective leagues and raring to go for a Champions League trophy and are almost even in terms of balance, so expectations automatically are very high for the game.