In a bid to maximise their dealings with the boundary rope, India will have to reconsider their batting lineup in T20Is and through this piece, we bring to you a few possibilities that the management can look at en route to their WT20 preparation.

It's advantage India as the next World T20 will be held in the land of arguably the most competitive and followed T20 franchise leagues in the world, the Indian Premier League, in another seven months from now. The league, over the years, has provided India abundant striking options, few of whom are yet to cement their place in India's T20I team, while few others await their chances in the impending five-match series against England. The abundance has often created a happy headache for the team management, yet India, who have been an invincible force in Tests and had a dominant run to World Cup 2019 tournament, haven't been equally successful in the shortest format of the game. India do have a good win-loss ratio in T20Is since 2016 (2.571), only second behind Afghanistan (3.4), but similar to their preparation for the 50-over World Cup in 2019, Virat Kohli's team has quite a few batting gaps to fill.

The primary issue bothering India's batting has been their inability to maximise on boundaries in the PowerPlay and Middle overs. While India have been among the best scoring rate and boundaries per ball since 2016 in the death overs, their corresponding numbers in the first two batting phases have been poor. India, since 2016, have managed 7.69 runs per over in the first six overs, and scored boundaries every 5.16 balls, both of which are only fractionally better than the average corresponding numbers of all the World T20 2021 participants and stand fifth respectively in both the categories. In the middle overs, India score at 7.71 runs per over with a boundary after every 7.56 balls, which is again only a tad better than the average figures and stand well behind among their WT20 competitors. 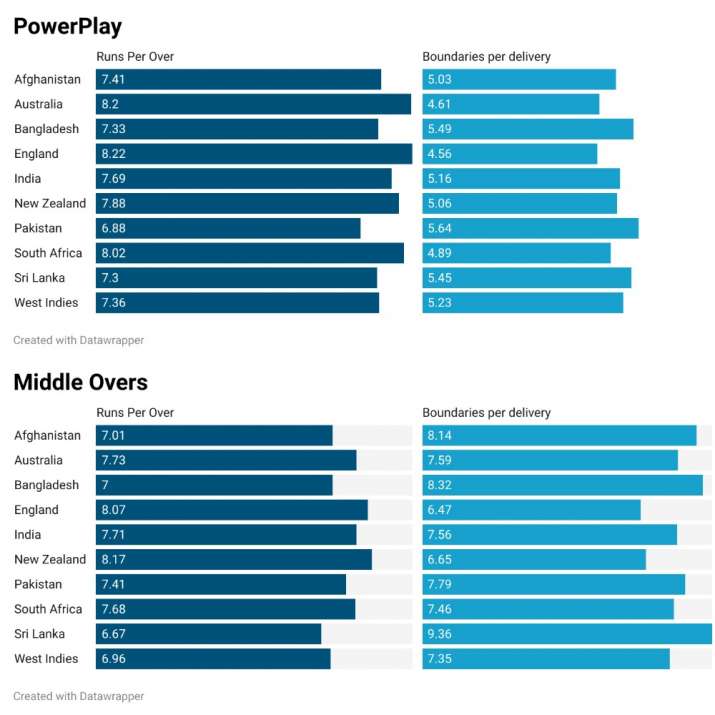 In a bid to maximise their dealings with the boundary rope, India will have to reconsider their batting lineup in T20Is and through this piece, we bring to you a few possibilities that the management can look at en route to their WT20 preparation.

India's opening combinations since 2018 have primarily been between Rohit Sharma, KL Rahul and Shikhar Dhawan with the former, who has always been the first-choice option, being the highest run-getter at that position in T20I cricket. Although it is Rahul who scores at a better rate than the two, what stands in favour of Rohit is his ability to deal with boundaries more often than Rahul and Dhawan. However, in comparison to T20I openers who have at least faced 300 deliveries, their runs per over and balls per boundary have been significantly lower. 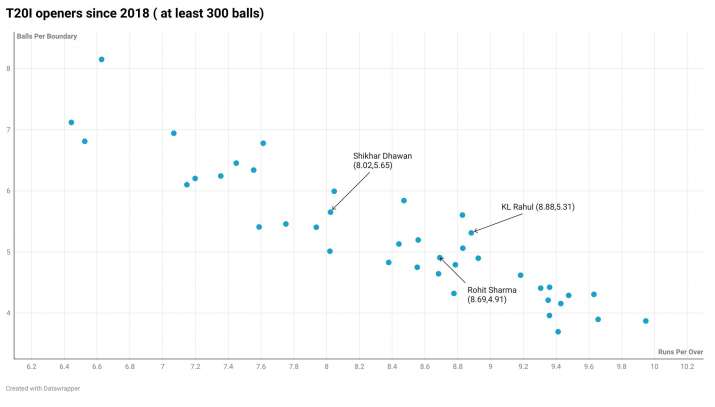 Rohit's numbers as an opener in IPL since 2018 have however been vastly contrasting. Although he tends to shuffle his position according to the need of Mumbai Indians, Rohit, in 29 innings as an opener, has scored at 7.59 runs per over with a boundary every 5.04 balls. The corresponding numbers for Rohit are much lower in the PowerPlay overs - 7.31 and 5.22 and finds the rope less often in the middle overs (7-15), every 6.48 deliveries while keeping his scoring rate similar almost (7.5). 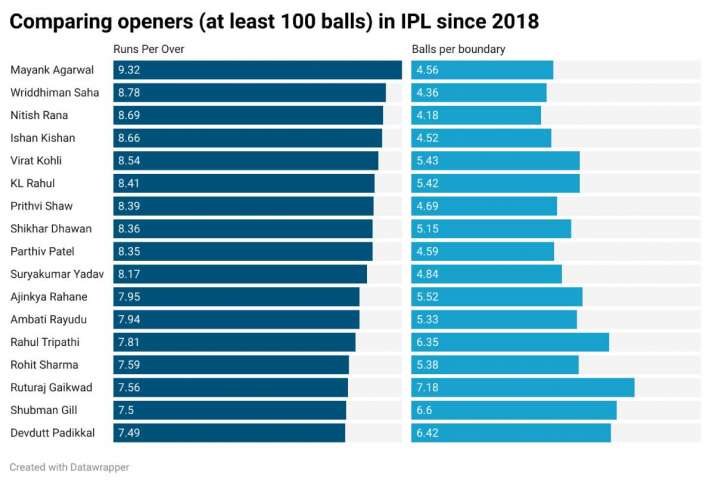 Rahul's 2018 season reflected the perfect job for an opener in T20 cricket. He averaged 54.91 en route to his tally of 659 runs, laced with six half-centuries, at a strike rate of 158.41. But while his aggression is dipped significantly, shown through his strike rates over the next two season, while his average has remained the same, indicating a shift to a more anchor role. Rahul has moreover shown weakness and caution against spinners in the middle overs, against whom he scores at a shade under seven runs per over while being dismissed 14 times in the last three IPL seasons.

Rahul and Dhawan hence make the most suitable opening pair for India's T20I lineup, but do they have better options?

Among Indian batters who have at least faced 100 balls as an opener, Mayank Agarwal's scoring rate of 9.32 runs per over is the best since 2018, although he has batted at that position in only the previous season. He scored 423 runs in 11 innings in IPL 2020 for Kings XI Punjab at an average of 42.3, a strike rate of 156.1 and a dot ball percentage of 29.2. Mayank's aggressive batting stood in stark contrast with Rahul's cautious strokeplay throughout the previous season. And what stands out in his favour is his ability to score at 10.44 runs per over with a dot ball percentage of just 17.8 in the middle overs where the spinners operate in the absence of fielding restrictions. 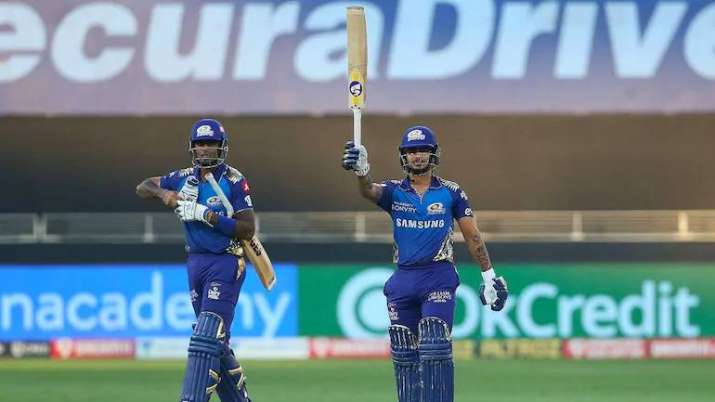 Among left-handers, India have another option in the young Ishan Kishan, who is also part of the T20I squad for England series. His scoring rate of 8.66 runs per over is the fourth-best since 2018 and his boundary rate of 4.48 balls is only the second-best. However, in IPL, Ishan has featured as an opener only on five occasions, but all his runs in the last three Syed Mushtaq Ali seasons have come from that position where he scores at 8.43 runs per over and deals with boundaries every 4.63 deliveries.

Among the 13 players who have featured in these three positions for India since 2018, Kohli has scored 30 per cent of those runs. However, Kohli deals less frequently with boundaries, every 7.11 deliveries at that position, but his dismissal rate of 33.14 (third-best since 2018 among batters who have at least faced 500 deliveries in T20I cricket) and a dot ball percentage of 25.3 accentuates his value in the T20I lineup. 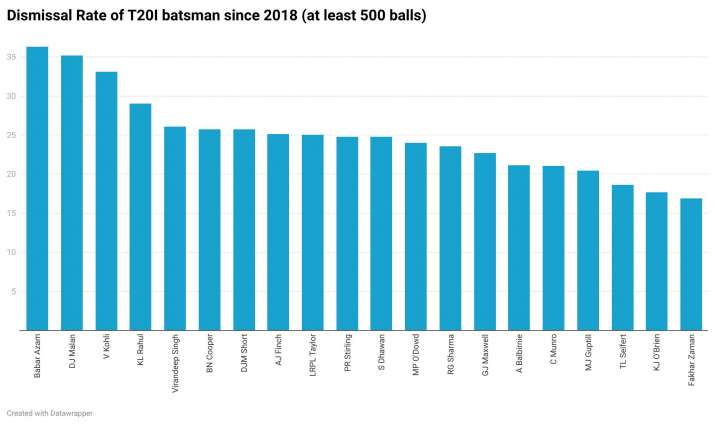 Among the remaining 12 players, Shreyas Iyer, Manish Pandey and Rishabh Pant have appeared most frequently in the middle order. With Kohli holding one end, India will need the batsman on the other end to fire more often to accelerate the run rate, implying the need for batsmen with higher boundary runs per over. Since 2018 in IPL, Iyer and Pandey have among the least scoring rate at that batting position with a near-identical rate of 7.5 runs per over. 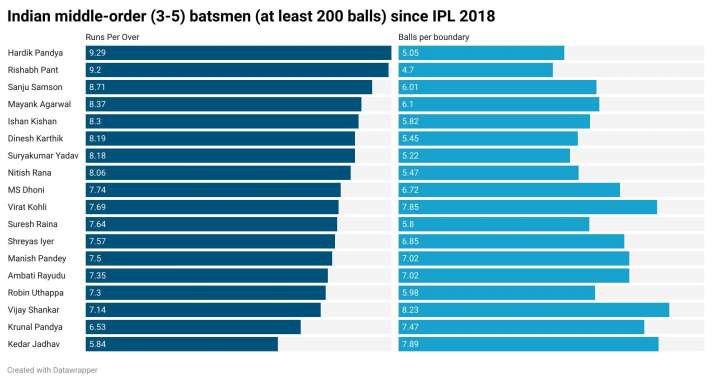 Pant's numbers have, however, been breathtaking - scoring at 9.20 runs per over with a boundary every 4.69 balls and a dot ball percentage of 31.7. What has however not worked in favour of the youngster is that he has failed to emulate his IPL numbers in T20I cricket where he scores at 7.32 runs per over from that position, which is only better than Pandey's run rate of 7.14, and his boundary rate is similar to that of Kohli's 7.11. Besides Pant, India have three other options in the Mumbai Indians duo of Ishan and Suryakumar Yadav along with Sanju Samson.

COULD KOHLI BE PUSHED AS AN OPENER?

Kohli has opened for Royal Challengers Bangalore in 18 innings, scoring 595 runs at 8.54 runs per over, the third most by an opener since 2018. The last he did so, in 2019 IPL, he scored a century, against Kolkata Knight Riders. He is yet to do it for India.

With the team aiming to maximise boundary rate, especially in the middle overs where Kohli scores at 7.02 runs per over, India will need to work out a combination among Pant, Ishan, Suryakumar and Samson. But with Kohli being irreplaceable with his impressive numbers as an anchor, India can try out a lineup with the captain as an opener. This could also allow, India to squeeze in as many as three left-handers between positions 1 and 5 and add more batting firepower in the lower order alongside Hardik Pandya.