The IPL 2021 resumed on September 19 with the game between Chennai Super Kings (CSK) and Mumbai Indians (MI).

The broadcast of the 2021 Indian Premier League (IPL 2021) has reportedly been banned by the Taliban, which formed a new government in Afghanistan earlier this month. Afghanistan internationals Rashid Khan, Mohammad Nabi and Mujeeb-ur-Rahman are taking part in the current edition of the tournament.

The IPL 2021 resumed on September 19 with the game between Chennai Super Kings (CSK) and Mumbai Indians (MI).

IPL 2021: PBKS vs RR- Best spell ever I have ever seen, Riyan Parag on Kartik Tyagi's final over

According to a tweet from M. Ibrahim Momand who has been a media manager with Afghanistan Cricket in the past, IPL is banned in the country due to possible 'Anti-Islam contents'.

"Afghanistan national television will not broadcast the @IPL as usual as it was reportedly banned to live the matches resumed tonight due to possible anti-islam contents, girls dancing & the attendence of barred hair women in the stadiums by Islamic Emirates of the Taliban," he wrote.

Other journalists in the country have also reported a ban on the tournament's coverage inside Afghanistan.

Star spinner Rashid Khan and Mohammad Nabi are currently with the Sunrisers Hyderabad (SRH) camp as they resume their campaign later tonight against Delhi Capitals. It is still unconfirmed whether Mujeeb-ur-Rahman, who is also a part of SRH, has joined the side or not. On September 15, it was reported that Rahman was yet to join the squad as he contined to wait for a UAE visa.

Rashid has been one of the most consistent performers in IPL over the past few years. Having made his IPL debut in 2017, Rashid has appeared in 69 matches, taking 85 wickets at a brilliant economy rate of 6.23. Since the Afghan spinner made his debut in the league, only India's Jasprit Bumrah (91) has taken more wickets than him in the tournament. 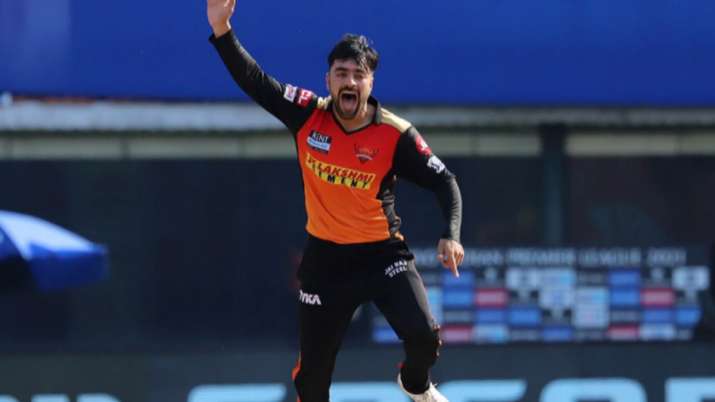 Rashid remains one of the key figures in the SRH XI. Furthermore, the IPL experience of Rashid and Nabi has also been key to Afghanistan's gradual rise in international cricket, as the two have produced a number of match-winning performances across formats for the international side.

A ban on the Indian Premier League comes as a bitter blow to the trio, as well as a number of young Afghanistan cricketers for whom T20 leagues remain an important part for career growth. The future of Rashid and co. remains unconfirmed as Taliban have not banned their players from participating in the tournament yet, but their policies are likely to have significant repurcussions on Afghanistan's exposure in international cricket.

The Taliban's discriminatory policies against women's sports have also drawn global criticism. Earlier this month, Cricket Australia had announced their decision to cancel the one-off Test against Afghanistan if women are not allowed to play cricket in the country.

Afghanistan's new sports chief Bashir Ahmad Rustamzai had said last week that the country will allow 400 sports but declined to confirm if women will participate in any of them.

"Please don’t ask more questions about women," he said, as quoted by the AFP.

In such a situation, Afghanistan's national cricket team is set to take a toll, as the country remains cold-shouldered due to its gender discrimination among various other practices. This will directly hamper the growth of Afghanistan cricket, which had otherwise been exponential over the past years.