Heroic trip Down Under and a near-perfect home campaign: Team India's road to WTC final

Ahead of the summit clash in Southampton against New Zealand, we take a look at India's road to the final.

The incumbent Test Mace holder and the then World No.1 got off the blocks in supreme manner with their usual dominance at home before scripting a memorable Test series win Down Under. Team India were touted to reach the final of the inaugural World Test Championship even before the tournament had its opener, but a change in qualification scenario by the ICC owing tp the pandemic left Virat Kohli's men waiting until their last game to know their fate. And a Test series win against England on home soil sealed their berth for the elusive final.

Ahead of the summit clash in Southampton against New Zealand, we take a look at India's road to the final.

Ishant Sharma's five-wicket haul (5/43) at North Sound helped India secure a 75-run lead in the first innings after half-centuries from Ajinkya Rahane and Ravindra Jadeja guided the tourists to 297. The deputy then followed up his 81 with a 242-ball 102, while being ably assisted by Hanuma Vihari (93) as India set a colossal 419-run target. Jasprit Bumrah's stupendous 5/7 restricted the Windies to just 100, handing India an emphatic 318-run win.

Bumrah once again orchestrated the Windies fall, this time in Kingston, finishing with 6 for 27, which included his maiden Test hat-trick, after Vihari's 111 guided India to 416. Rahane and Vihari further added to the hosts' woes with a century stand and the Windies failed to recover, suffering a 257-run defeat. 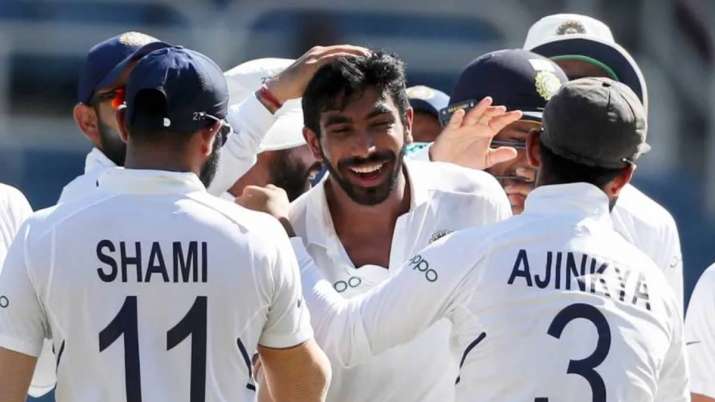 With the 2-0 series win in West Indies, Kohli had surpassed Dhoni to become India's most successful Test captain.

When India last faced South Africa, the series had marked the beginning of India's rise as a dominant pace bowling attack. Although India had lost that series, hosted by South Africa, the pacers had earned accolades for their impressive show. A year after that contest, South Africa landed in India with the hope of breaking India's winning streak on home soil, one which dates back to 2012. But their toothless efforts only helped India extend their indomitable home run with a 3-0 whitewash.

India's new opening pair in Mayank Agarwal (215) and Rohit Sharma (176), stitched a record-breaking 317-run stand as India declared their innings at 502 for 7. Ravichandran Ashwin picked a seven-wicket haul (7 for 145) but a valiant 160 from Dean Elgar and Quinton de Kock's 111 helped South Africa reduce the gap to 71 runs. Rohit then added a 149-ball 127 before Mohammed Shami picked a five-wicket haul (5 for 35) as India bagged a203-run win. 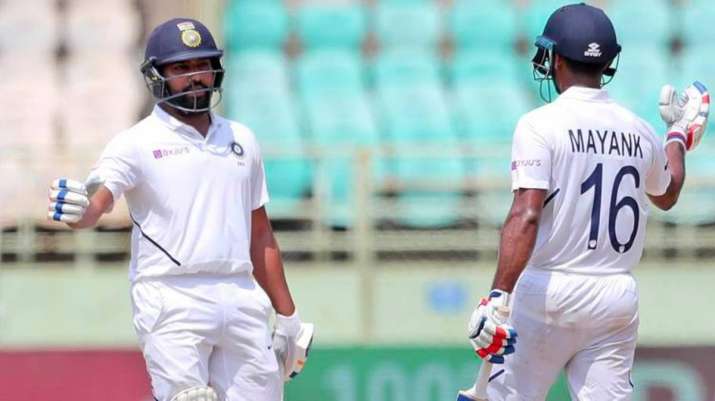 In the second Test, Kohli hogged the limelight with his unbeaten and record-scripting 254, alongside Mayank's second consecutive century (108) as India posted a first-innings total of 601 for 5. A hapless batting effort from the visitors saw India bag a fourth consecutive win in WTC, beaing South Africa by an innings and 137 runs.

Bangladesh were simply steamrolled in less than three days as India secured a third consecutive innings defeat in the series opener in Indore. Mayank scored 243 while the pacers put on another stupendous show, picking 14 wickets, as Bangladesh lost by an innings and 130 runs.

India stretched their winning run in their maiden Pink-Ball Test at the Eden Gardens, pulling off yet another innings victory where the pacers once again demonstrated their class.

India's unbeaten run in the WTC were put to a haunting halt in New Zealand as they were blanked in the two-match series, which brought back memories of the ghastly 2002/03 series. The toss did not go their way and India were bowled for 165 in the first innings. Bowlers took time to hit the right length before Ishant picked a five wicket haul, but the wagging tail frustrated the Indian attack as New Zealand finished with 358 runs. Tim Southee and Trent Boult picked nine wickets between themselves as India were bowled out of 191, leaving the hosts a target of just nine runs. India suffered their first defeat in the tournament in Wellington.

Despite the defeat in New Zealand, India were still at the top of the WTC points table and favourites to reach the final. But before India landed in Australia to defend the Border-Gavaskar Trophy, ICC announced a change in qualification scenario which saw India lose a spot in the table. And the concerning change in rule was followed by the darkest night in Indian cricket. The visitors were bowled by for just 36 at the Adelaide Oval before sinking to an eight-wicket defeat.

Kohli then left home for the birth of his first child, Mohammed Shami was benched owing to a broken forearm and midway through the second Test, Umesh Yadav limped off with a series-ending injury. Yet, against all odds, India put on a valiant fight at the MCG, inspired by a timely century from Rahane, as the visitors bounced back in the series with an eight-wicket win.

India were left bruised as injury toll got worse, but driven by sheer determination and belief the tourists put on some of the bravest batting displays in cricket. An injured Rishabh Pant scored a counter-attacking 97 off 118 in the final innings in India's chase of 407, Ashwin, with a torn back, and Vihari with a hamstring injury, then stitched a valiant stand, batting for almost 40 overs, to help India force the draw.

Ashwin and Vihari were ruled out for the decider in Gabba, Australia's pride, their fortress. And so was Bumrah and Jadeja. While the accolades continued to pour in for the defending title holders, a Gabba miracle was ruled out.

But the fairytale continued and India scripted a story for the ages as Pant inspired the visitors to take down fortress Gabba and grab the series 3-1.

New Zealand had by then secured their spot in the final. Australia, left unfortunate by being penalised for slow-over-rate, had their hopes rested on the India-England series. A cleansweep in Sri Lanka gave England an outside chance at making the final. And for India, they required to win at least two Tests in the four-match series.

Mush to their despair, India lost the opener in Chennai as Joe Root's double century guided the visitors to a 227-run win. But India bounced back in style on the back of a century from Rohit (161) and a all-round brilliance from Ashwin (106 and 5/43) before debutant Axar Patel picked his maiden fi-fer (5/60) to help India win by 317 runs.

Axar's 11 wickets (6/38, 5/32) in the third Test played a pivotal role in India taking a lead in the series and sealing their spot in the WTC final.

Pant once again proved his worth in Test cricket with a well-paced and innings-reviving century in the final Test before the spinners guided India to an innings-and-25-run victory.