Rohit Sharma's reminder to Dinesh Karthik: 'You still have some cricket left!'

Dinesh Karthik has been doing commentary stints in England over the past month.

Indian wicketkeeper-batsman Dinesh Karthik is currently making headlines with his impressive commentary stints in the United Kingdom. Karthik was the part of the coverage of the World Test Championship final between India and New Zealand, and was also in the commentary box during the England-Sri Lanka limited-overs series.

On Thursday, Karthik posted a picture from the cricket field, where he is posing in a suit. “Just me being me,” Karthik wrote with the picture.

WTC Final | Against quality side like NZ, you need to keep things simple and realistic: Rohit

Suryakumar can bat at No.3 since Kohli-Rohit are going to open in T20 World Cup: Manjrekar

Rohit Sharma, Rahul ahead of Dhawan for T20 WC spot for now: Agarkar

Rohit Sharma, who is the vice-captain of Indian limited-overs team and has shared the dressing room with Karthik in many games throughout his career, responded to the post.

Rohit wrote, "You still have some cricket left. FYI!" 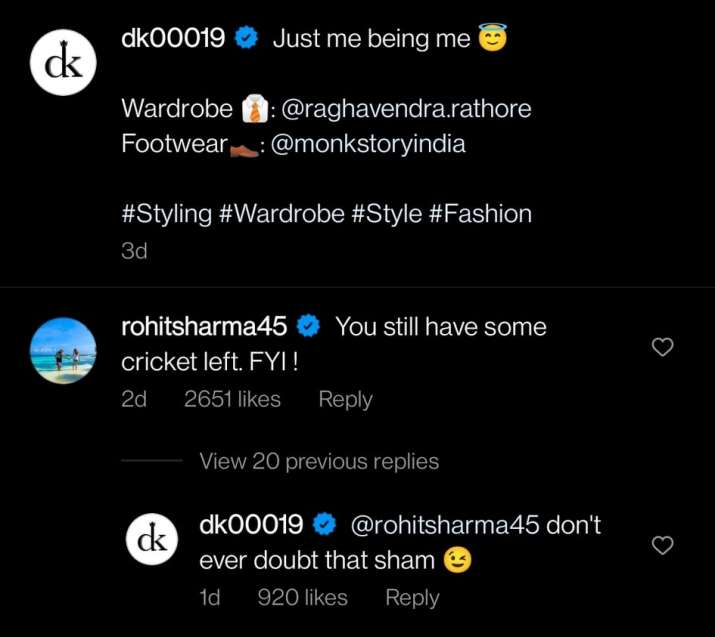 Karthik last played in the 2021 edition of the Indian Premier League for the Kolkata Knight Riders in April. Earlier this year, he led his state team Tamil Nadu to Syed Mushtaq Ali Trophy title.

The wicketkeeper-batsman has represented India in 26 Tests, 94 ODIs and 32 T20Is, and last appeared for the team in the semifinal of the 2019 World Cup against New Zealand.

Following the end of the WC campaign, Karthik lost his place in the side. With the emergence of young wicketkeeper-batsmen in Rishabh Pant, Ishan Kishan and Sanju Samson, Karthik has failed to make an international comeback so far.