Indian captain Virat Kohli has received a compliment on his football skills from England's football team captain Harry Kane. Kohli had shared a picture of him playing the game on his official social media profiles.

Kane wrote, "Nice technique right there," as Virat Kohli is seen playing football with other members of the Royal Challengers Bangalore squad.

What A Shot! Virat Kohli smashes ball over the covers in RCB's net session | Watch

In reply, Virat wrote, "@harrykane haha thanks mate. Coming from a technically gifted player like yourself, I know it's a legit observation." 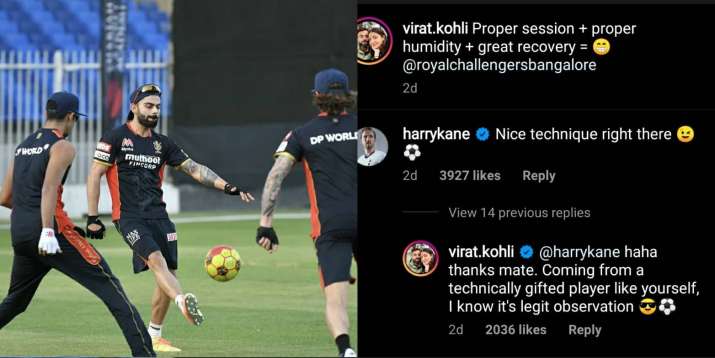 Virat Kohli and Harry Kane have shared mutual admiration for many years on social media, and met each other for the first time during the 2019 Cricket World Cup in England.

Kane had shared a selfie with Virat, calling the Indian captain a "great guy and a brilliant sportsman."

Harry Kane, who leads the English football team, is widely regarded as one of the best strikers in Europe. He also led the English side to a fourth-place finish in the 2018 FIFA World Cup.

Virat Kohli, meanwhile, is currently in the United Arab Emirates, where he is with the Royal Challengers Bangalore as the side prepares for the 2020 edition of the Indian Premier League.

The 13th edition of the league will begin on September 19.