Hello and welcome to India TV's live blog for the final of ICC T20 World Cup 2021 between New Zealand and Australia. This is your host Akash Kharade who will take you through all the updates of the big final.

Australia 82/1 in 10 overs Mitchell Santner to continue from the other end. This time he bowls to Marsh and gives just five runs from the over.

Australia 77/1 in 9 overs David Warner has shifted gears as he hit Sodhi for two fours and a six to collect 17 runs from the over. Australia is on top.

Australia 60/1 in 8 overs Spin from both the ends as Mitchell Santner comes into the attack. Marsh breaks the shackles as he sweeps Santner. 10 runs from the over.

Australia 50/1 in 7 overs Ish Sodhi is into the attack. Five singles and a double in the over. Australian batters are not ready to take any risk against spinners.

Australia 43/1 in 6 overs Tight over by Adam Milne to finish the powerplay on high. Just three runs from it.

Australia 40/1 in 5 overs Tim Southee hit for a six by David Warner. The southpaw is winning this battle. 10 runs from the over.

Australia 30/1 in 4 overs Mitchell Marsh on the counterattack as he hit Adam Milne for six and two boundaries. 15 runs from the over. After losing Finch Australia need to stay on the attack as they are chasing a big total.

Australia 15/1 in 3 overs Four runs and the wicket of Australia captain Aaron Finch in the over. Trent Boult remove Finch with a short ball when he was expecting a full one. He departs on 5.

Australia 11/0 in 2 overs David Warner hits two back to back boundaries to score 10 runs from the over. Finch is yet to find a touch.

Australia 1/0 in 1 over Tight over by Boult to start the proceedings. Just one run from the over. Finch hit on the pads on the last ball but the ball was swinging too much.

New Zealand's captain Kane Williamson was on fire in the final against Australia as he scored 85 runs in 48 balls in the final of the ICC T20 World Cup 2021 here at the Dubai International Stadium on Sunday. Martin Guptill was the 2nd highest run-scorer for Blackcaps as he scored 28 runs in 35 balls. For Australia, Josh Hazlewood was the pick of the bowlers as he picked three crucial wickets while Adam Zampa also chipped in with one wicket.

New Zealand 172/4 in 20 overs Just 10 runs from last over by Starc as Seifert welcomes him with a boundary. Followed by six runs in last five balls.

New Zealand 162/4 in 19 overs Neesham hits Cummins for a six down the ground to gather 13 runs from the over.

New Zealand 149/4 in 18 overs Two big wickets from Josh Hazlewood's last over as he finished with 16 runs in four over with three wickets under his belt. Five runs from the over. Kane Williamson and Glenn Phillips were dismissed in the same over.

New Zealand 144/2 in 17 overs Pat Cummins pulls things back as he bowls eight-run over. New Zealand need to make most of the final 18 balls.

New Zealand 136/2 in 16 overs Expensive over for Australia as Starc hit for four boundaries and a six by Kane Williamson. 22 runs from the over. Momentum shifting towards Blackcaps.

New Zealand 114/2 in 15 overs Adam Zampa finish with one wicket in four overs giving away just 26 runs. The leg-spinner was hit for a six by Williamson and a four by Glenn Phillips. 12 runs from the over.

New Zealand 102/2 in 14 overs Pat Cummins returns for his 2nd spell. Bowls a tight over after an expensive over by Maxwell. Just 5 runs from the over.

New Zealand 97/2 in 13 overs New Zealand skipper Kane Williamson shifting gears as he completes fifty with two back to back sixes against Glenn Maxwell. 16 runs from the over.

New Zealand 81/2 in 12 overs Martin Guptill's sluggish innings comes to an end as Adam Zampa strikes on the first ball of his 2nd over. He departs on 28 runs from 35 balls. Seven runs from the over.

New Zealand 74/1 in 11 overs Kane Williamson survives as Hazelwood drops a simple catch and guides it to the boundary. Williamson hits three back to back fours against Starc. 19 runs from the over.

New Zealand 57/1 in 10 overs Six singles from Adam Zampa's over as Williamson and Guptill opt not to play big shots against him.

New Zealand 51/1 in 9 overs Much needed over for New Zealand as 11 runs scored in it. Mitchell Marsh hit for back to back boundaries by Kane Williamson.

New Zealand 40/1 in 8 overs Australia's most successful bowler of the tournament is here to bowl the 8th over. Adam Zampa gives just three runs from the 1st over.

New Zealand 37/1 in 7 overs Third consecutive tight over by Australian bowlers as Maxwell gives just five runs from his second over.

New Zealand 32/1 in 6 overs Another tight over by Hazelwood. Just two runs from it. Australia has dominated powerplay. New Zealand's lowest total in the powerplay in this competition.

New Zealand 30/1 in 5 overs Just two runs from Pat Cummins's first over as he is making most of the pressure built by Hazelwood. Kane Williamson has joined Guptill in the middle.

New Zealand 23/0 in 3 overs Glenn Maxwell is here to bowl the 3rd over for Australia. Daryl Mitchell welcomes him with a six. Four singles from next five balls. 10 runs from the over.

New Zealand 13/0 in 2 overs Josh Hazelwood bowls three tight balls against Guptill but one lose bowl spoils the over as the right-hander pulls it for a boundary. Just four runs from the over.

New Zealand 9/0 in 1 over Mitchell Starc gets hit for a boundary on the second ball of the final, as Martin Guptill takes the charge. Nine runs from the over.

Australia captain Aaron Finch won the toss and opt to field first against New Zealand in the final of the ICC T20 World Cup 2021 here at the Dubai International Stadium on Sunday. Australia are unchanged while New Zealand replaced Devon Conway with Tim Seifert.

Kane Williamson: We would have fielded as well. It looks like a reasonable wicket and who knows about the dew. Just trying to get a competitive total. We have one obvious change: Conway is out and Seifert is in. It is a shame that he misses but as a team, we have to move on and focus on the challenge at hand. Mitch Santner is a world-class operator and it didn't quite work out in the match the other night. We don't want to look too far ahead and we just need to make a few small adjustments.

Aaron Finch: We'll have a bowl. Looks a little bit dry but I don't think it will change. It might skid with the new ball. We're playing the same team. The way we hung in the contest and take it deep was crucial for us. Zampa has been superb for a while in the shortest format, and hopefully, that will continue. It is a new format, a new team and our record over NZ doesn't matter at all.

6:55 PM: Blackcaps giving all they got in final preparation ahead of the summit clash.

6:45 PM: Aaron Finch and boys hit nets ahead of the big final

6:30 PM: Kane Williamson and boys gearing up for yet another final of ICC event

Former Sri Lanka captain Mahela Jayawardene had his say on who will win the final of the ICC Men's T20 World Cup here on Sunday. He said that his mind is with Australia but his heart thinks New Zealand will win the final. Both Australia and New Zealand are aiming to clinch their first-ever Men's T20 World Cup trophy at the Dubai International Stadium.

New Zealand skipper Kane Williamson has said that the ICC T20 World Cup schedule, where his team played four games in seven days, had been "somewhat hectic", but added that the two-day break between the semifinal and the title clash against Australia here had given the team the time to prepare for the summit clash. 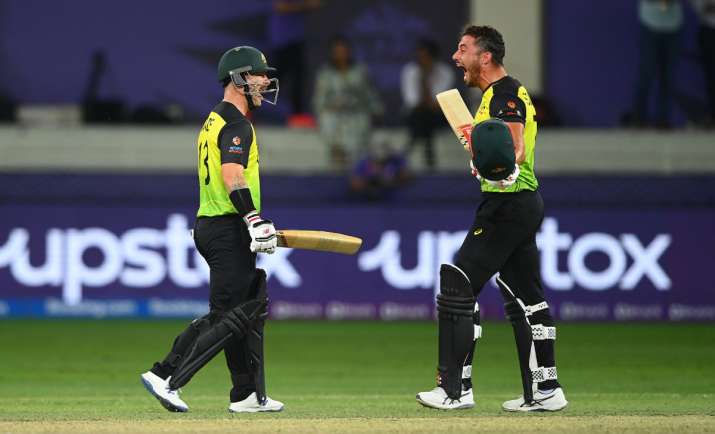 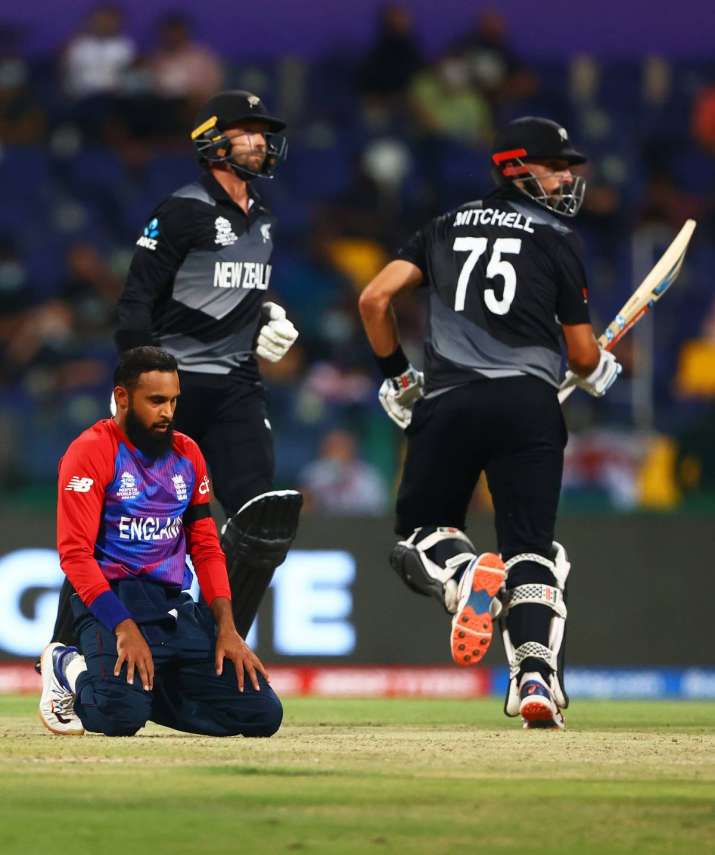 5:00 PM: Josh Hazlewood's stat in this edition of the marquee tournament

4:45 PM: Trent Boult at top of the vs Adam Zampa in the middle. Who will take the most wickets in the final?

3:30 PM: Is New Zealand one of the best teams in all formats of the game?

3:15 PM: New Zealand are unaffected by the world talks and unbothered by their 'underdogs' title ahead of the high-octane clash at the Dubai International Stadium.

3:00 PM: Kane Williamson's New Zealand undertake final training session ahead of the game against Australia in the final of T20 World Cup 2021 in Dubai.

Australia's limited-overs skipper Aaron Finch feels there is a potential for Matthew Wade to come higher up in the order as early as in the ICC T20 World Cup final against New Zealand later on Sunday in order to fully realize his batting abilities.

Wade and Marcus Stoinis came together when the chips were down against Pakistan in the T20 World Cup semifinal in Dubai on November 11, with the former cashing in on a dropped catch by Hasan Ali to smash three sixes off three deliveries to guide Australia into the final for the second time in the history of the tournament.

The feistiness of Australia will clash with the tactical shrewdness of a perennially understated New Zealand when the Trans-Tasman rivals battle for their maiden T20 World Cup trophy here on Sunday.

Considering how both Australia and New Zealand won their respective semifinals against fancied opponents, one can expect another dramatic finish at the "Ring of Fire".

Australia, who have won a record five World Cup titles in 50-over cricket, have surprisingly not got their hands on the T20 showpiece.

New Zealand, on the other hand, have always been consistent in ICC events but now seem to have the self-belief of going all way under Kane Williamson's astute leadership.

It will be their first T20 World Cup final and if they do end up winning it, it will be a remarkable achievement for a country of five million which keeps churning out world-class players.

Australia hold the upper hand over the reigning world Test champions in overall T20 meetings but the Black Caps won their only meeting in the World Cup back in the 2016 edition in India.

Their last meeting in a World Cup final, in the 50-over format in 2015, was bossed by the Aussies, who have not won an ICC event since then.

Fans of both the teams will have to work against their body clock to watch the game from their TV sets with the final starting well past midnight in both countries.