MS Dhoni steered India to greatness after the debacle of 2007 ODI World Cup. As he bids goodbye to international cricket, let's take a look at his incredible start as the captain of Indian team.

MS Dhoni – The Phenom has hung his boots after a decorated career in international cricket. Arguably the country’s one of the best (if not best) captains that led India to many milestones and lays the foundation of the concrete team in the future.

In 2007 T20 World Cup, it was the first time when Dhoni got the first opportunity to lead the Indian team and he didn’t disappoint at all as Men in Blue won the inaugural T20 WC. The success story of Dhoni might look a fairy tale for many but it is not.

MS Dhoni: A demigod who revolutionized Indian cricket for the better

In the year 2007, Team India was eliminated from the ICC ODI World Cup in the very first round after humiliating defeats against Bangladesh and Sri Lanka. The tournament was over for Indian team quite early and fans were furious in the nation as they turned on the road to tear and burn the posters of the cricket. It was a very low point for every cricketer of that team. Captain Rahul Dravid was feeling the pressure after the debacle, controversial coach Greg Chappell was terminated from his post and the senior players (Sachin Tendulkar, Virender Sehwag and Sourav Ganguly) were asked to take the responsibility of the poor show. (Also Read | MS Dhoni and Suresh Raina: A friendship that goes beyond the boundaries)

Later that year, another big ICC tournament was about to happen – the first T20 World Cup. This time the selectors and senior players had something different in mind as they decided to send the young team for the mega tournament.

The masters of ODI cricket like Sachin Tendulkar, Sourav Ganguly and Rahul Dravid were not the part of the squad and the captaincy responsibility was given to the Ranchi boy- Mahendra Singh Dhoni.

Everyone at that time, everyone knew the power-packed batting abilities of Dhoni but no one was aware of his exceptional game awareness. It was a tough job for Dhoni to lead the young team with raw talents like Rohit Sharma, Robin Uthappa, S Sreesanth and many more.

MS Dhoni on Instagram: Consider me retired from 19:29 👀 pic.twitter.com/ZEgJL82x3h

There were no expectations from the Indian team in that tournament after the ODI WC debacle earlier so the boys had nothing to lose situation at that time. On the other hand players like Virender Sehwag, Yuvraj Singh and MS Dhoni himself were desperate to forget the West Indies nightmare and do something big for the nation.

The stage was set for Dhoni and team and they owned it by becoming the inaugural T20 World Cup Champions. Everything was changed after that, the new revolution in cricket was started after that and MS Dhoni was pioneer of that. After T20 WC success, everyone was impressed with Dhoni’s leadership quality and he became the captain of India’s ODI team. (Also Read | A man who dared to dream: MS Dhoni's awe-inspiring journey from Ranchi to twin-World Cup heroics)

The T20 WC triumph was just the start for Dhoni as his biggest series win didn’t take much time. In 2008, Team India travelled to Australia for the CB series (Commonwealth Bank Series) and that changed the landscape of cricket in the country. It was the first time India won the ODI series in Australia after back to back clinical performances in two final of CB series. 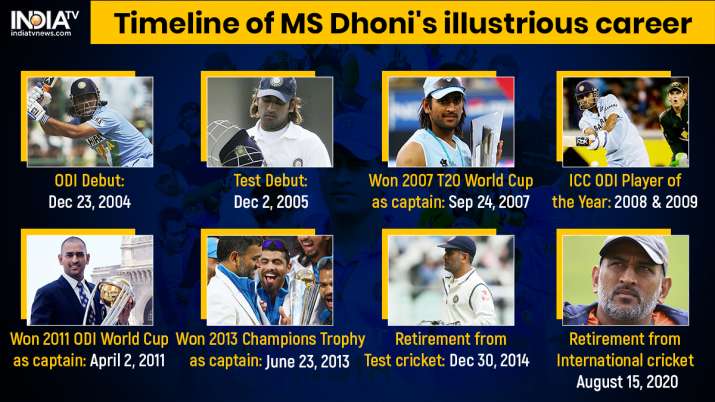 After that MS Dhoni era started in Indian cricket as the Men in Blue started their domination outside Asian countries with a series win in New Zealand in 2009. He also had some rough patches with early eliminations in 2009 and 2010 T20 World Cup, but the ‘Ranchi Boy’ didn’t hold himself back and fought back every time.

In 2011 World Cup, India were hosting the tournament alongside Asian countries (Sri Lanka and Bangladesh). It was tempted to be the last World Cup for legendary Sachin Tendulkar, and everyone wanted him to finally lift the World Cup trophy and MS Dhoni didn’t disappoint anybody. The daring captaincy of Dhoni finally brought World Cup trophy back to India after 28 years.