Defending champions Mumbai Indians will face two-time winners Chennai Super Kings in the second leg of the 14th season of the Indian Premier League (IPL) which will begin from September 19 onwards in the UAE. The league was suspended in May this year owing to a rise in coronavirus cases in India. As per the schedule released by the BCCI on Sunday, the Dubai International Stadium will stage 13 matches including the first qualifier and the final, Sharjah will host 10 matches including the Eliminator and the second qualifier and the remaining 8 matches will be held in Abu Dhabi.

The tournament was suspended in May after multiple COVID-19 cases were reported in its bio-bubble.

"The 14th season, which was postponed in May this year in the wake of the pandemic, will resume on 19th September in Dubai with a blockbuster clash between Chennai Super Kings and Mumbai Indians," said the BCCI in a statement.

A total number of 31 matches will be played in the duration of 27 days including seven doubles headers (five were held in India). 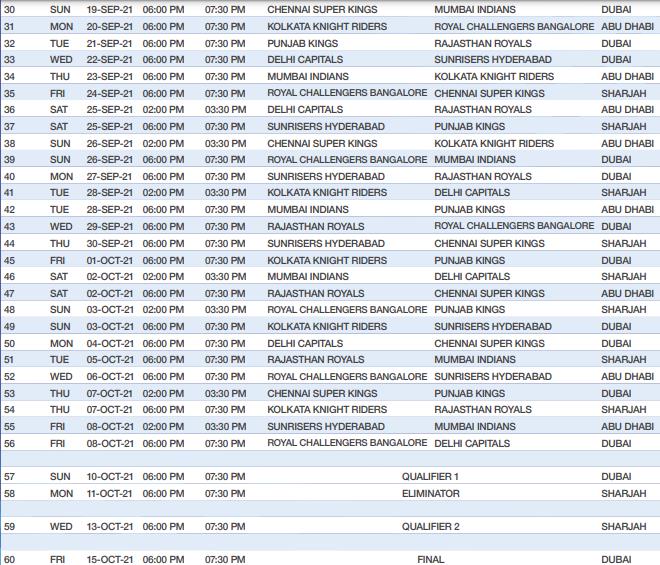 After the CSK-MI clash, the action will shift to Abu Dhabi where the Kolkata Knight Riders will square off against Royal Challengers Bangalore.

Sharjah will host its first game on September 24 when Royal Challengers Bangalore take on CSK.

The final league game will be played between RCB and Delhi Capitals on October 8.

The 2020 edition was held in the UAE in its entirety due to the pandemic.