The Indian women's cricket squad will be travelling along with the men's squad for their month-long tour of England. This Test will be India women's first in six years.

Indian women's team cricketer Harmanpreet Kaur on Sunday shared a picture of the team's Test jersey ahead of the one-off game against England this June.

Sharing the picture on her Instagram story, Harmanpreet reacted writing, "Loving this already." At a fan's request, Harmanpreet also shared the image of the back side of the jersey bearing her name and the jersey number.

Indian women will dominate when as much thought goes into their game as men: Isa Guha

Third women's T20 between India and England rescheduled to July 14

The Indian women's cricket squad will be travelling along with the men's squad for their month-long tour of England. They too will undergo a quarantine period in Southampton where the Test match is scheduled. 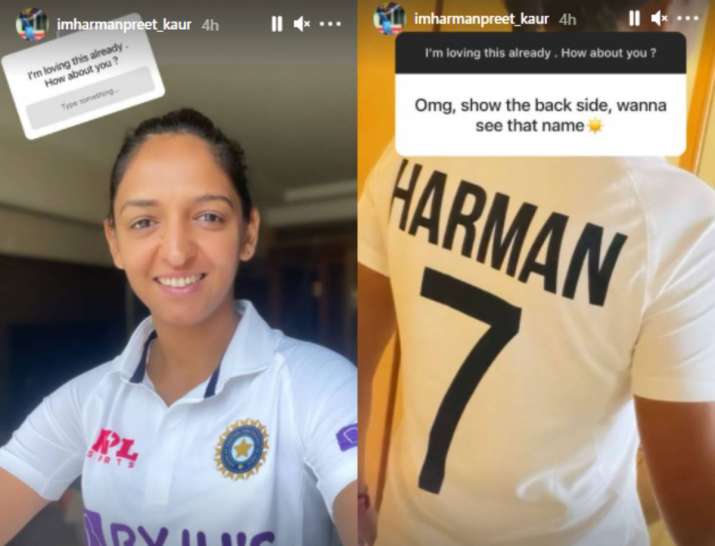 "The Indian women's contingent is not moving to Bristol on landing. Instead they will also be going to Southampton with the men's team and start their room quarantine. With ECB yet to send us the routine that we need to follow, the women's team will only leave for Bristol once the quarantine period in Southampton is over," a senior BCCI official privy to travel details told PTI on conditions of anonymity.

This Test will be India women's first in six years. BCCI secretary Jay Shah had taken to Twitter to make the big announcement on the occasion of International Women's Day. "On the occasion of #InternationalWomensDay, I’m pleased to announce that #TeamIndia @BCCIWomen will play a one-off Test match against @ECB_cricket later this year. The women in blue will be donning the whites again," he tweeted.

142 Women's Test matches have been played to date with its inception in 1934 and the last of its kind witnessed in the Women's Ashes contest in 2019 in England.

India Women made their debut in the format in 1976, and have played 37 matches to date, winning only five while 25 ended in a draw, implying seven defeats. India have, however, won their last three Tests - defeating England Women twice in their own backyard, winning by 5 and 6 wickets respectively, while condemning South Africa women to an innings and 34-run defeat.

India women are also scheduled to play a one-off Test in Australia later this year which is slated to be a pink-ball affair.