IPL 2021 | Talking points from PBKS vs SRH: Is it time for Punjab to look beyond Chris Gayle?

The veteran cricketer believes he still has "plenty in the tank left...looking forward to plenty more cricket." But Gayle's batting returns haven't been impressive yet.

Finally, Sunrisers Hyderabad win a game this season, a comprehensive victory setup by the bowlers and their destructive opening pair which came whilst chasing, in Chennai. The bowlers bundled out Punjab for a meagre 120 before the pair of David Warner and Jonny Bairstow raced away to 50 for no loss in the PowerPlay. The spinners restricted their scoring, but SRH were well ahead with their score before a patient 48-run unbeaten stand between Kane Williamson and Bairstow helped SRH cross the line.

Pooran was Punjab's most effective batsman in IPL 2020. In a season where Punjab's top-4 were the best among all teams, Pooran's figures stood out with a BASRA of around 205 and a boundary rate of tad above four. He finished the season with 353 runs in 208 balls in 14 innings at a strike rate of 169.7 with two fifties. However, Pooran has scored only nine runs this season, facing 11 balls in four innings with three ducks, including a golden duck.

IPL 2021 | It's all about starting fresh: David Warner pleased with SRH's first win of season

In his first match this season, Pooran was undone by a fielding brilliance from Chetan Sakariya as he registered a golden duck. He suffered a second consecutive duck, against CSK, when he mistimed the pull shot against a shortish delivery from Deepak Chahar aimed at his body, leaving Anil Kumble, the Punjab Kings coach, shell-shocked in the dugout. Pooran eventually managed to avoid a third successive, after scoring 9 runs against Delhi Capitals, which included his only boundary this season, before falling to a fuller delivery from Kagiso Rabada. But the luckless continued with an unfortunate run out on Wednesday. A needless call for a single from Chris Gayle and Pooran paid the price, courtesy of a superb direct throw from David Warner.

"No doubt he's one of the hard hitters of the ball, he can clear the boundary quite easily. As a bowler, when you are against a batter like him, it's quite difficult to get him out, I'll just try to do the basics best. Bowl to him in the right areas. As soon as you miss the line against such kind of a batsman, it's quite easy for them to hit you. You have to be more consistent and that's what I have in my mind for him," Rashid said before the start of the game in Chennai. 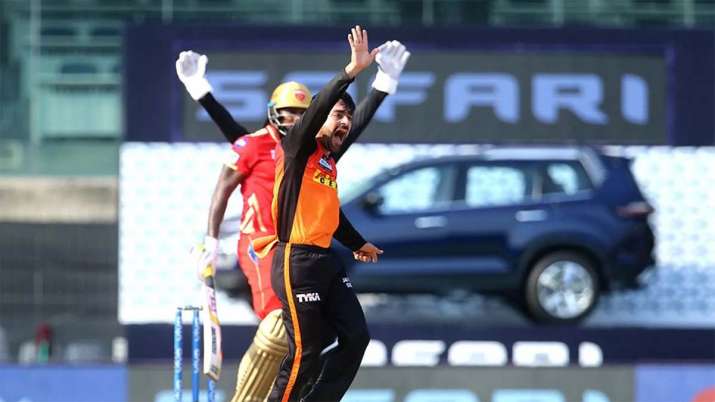 Gayle has a strong record against Rashid in IPL, scoring 58 runs in 26 deliveries at a strike rate of over 200 with just one dismissal. Overall, in T20s, he has dismissed him 3 times with Gayle having a scoring rate of 179.59. Yet it was Rashid who emerged on top in the battle when introduced in the attack in the ninth over, dismissing Gayle in only his third delivery to him. Gayle failed to read the slider and trusted his forward defensive push, but was beaten on the inside edge and struck plumb in line with the off stump.

Is it time for Punjab to look beyond Gayle?

The veteran cricketer believes he still has "plenty in the tank left...looking forward to plenty more cricket." But Gayle's batting returns haven't been impressive yet. In four innings, he has scored just 76 runs in 64 balls at a strike rate of 118.8, his lowest scoring rate since 2014, the only second season where he had gone without a half-century.

Punjab have another left-handed top-order batsman in the fray, the No.1 T20I batsman, Dawid Malan. Since 2019, only two players have scored 500 or more T20I runs at an average of more than 50 and with a strike rate greater than 140 - Virat Kohli (992 runs) and Malan (753 runs). However, in T20 cricket, his average and strike rate drops to 33.4 and 130.8 respectively. With Malan being a natural anchor, it might give Rahul the opportunity to return to his 2018 best.