Delhi Capitals and Royal Challengers Bangalore's defeat on an evening that was supposed to clarify two more spots for the playoffs has only complicated the calculation, while also ensuring one thing - there will be no dead runners this season.

Everything fell perfectly in place for Sunrisers Hyderabad on Saturday night at the iconic Sharjah as the 2016 champions continued their rejuvenating run to complete their second straight win at the fag-end of the competition, a clinical five-wicket victory that clearly gave them the upper hand as IPL 2020 heads into a complex yet entertaining league-stage end. Delhi Capitals and Royal Challengers Bangalore's defeat on an evening that was supposed to clarify two more spots for the playoffs has only complicated the calculation, while also ensuring one thing - there will be no dead runners this season. Here is how the qualification scenario looks like with just four more games to go... 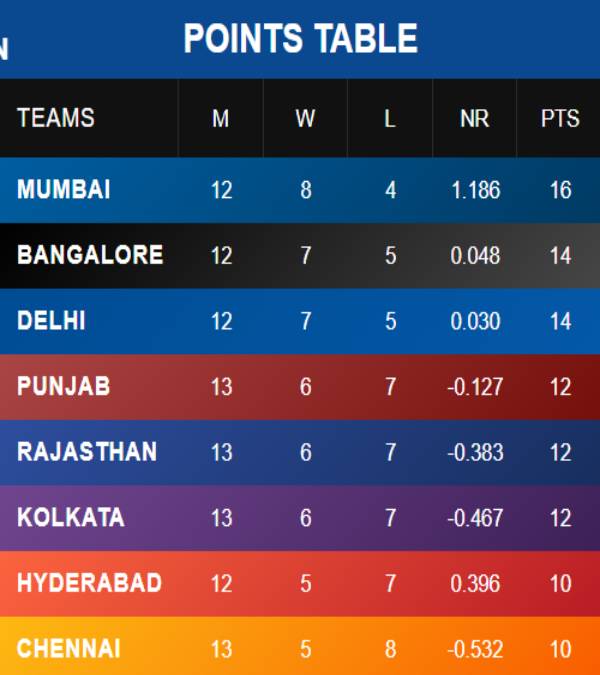 The four matches that remain:

Mumbai Indians, with yet another impressive win and emphatic win, against Delhi Capitals, ensured themselves a top-two finish. SRH's five-wicket win five hours later in Sharjah, against RCB, ensured that MI will definitely finish at the top of the table irrespective of the result in their final game.

The match between Delhi and Bangalore, which at the start of last week was considered as the decider for the top-two spots, will now be a virtual qualifier. A win for anyone would assure them a spot in the playoffs and the second position in the league stage. Hence the winner of the game will play Mumbai Indians in Qualifier 1.

The team losing might also find a way to the playoffs, but both have suffered an NRR jolt following their defeats on Saturday. RCB have an NRR of -0.145, only a tad better than Delhi's -0.159, but more than fifth-placed Kings XI Punjab -0.133. Hence, the team losing will have to ensure that party-pooper Chennai Super Kings defeat Kings XI on Sunday and SRH lose to Mumbai Indians in the final game. The game between Kolkata Knight Riders and Rajasthan Royals will be important for the respective sides, but with both having poor NRR, only a win by a huge margin will ensure them a playoffs spot.

If KXIP beat CSK, even by one run, they, along with the losing team from match number 55, will have to wait for the final league game given SRH have a superior NRR of +0.555.

In a nutshell, the final two spots will have teams with 14 points and fate decided by NRR. SRH have a guaranteed spot in the playoffs if they bat Mumbai, irrespective of their NRR. And KXIP, Rajasthan and Knight Riders may get eliminated even if they win their final league games.