With just 10 more games to go for the league stage ends, the qualification scenario has only gotten tighter.

The 13th edition of the Indian Premier League is the first-ever of its kind when no teams have managed to get past 14 points to qualify for the playoffs after 46 games in the league stage. And with just 10 more games to go for the league stage ends, the qualification scenario has only gotten tighter.

With their fifth straight win in the league, KXIP have topped Kolkata Knight Riders not just in their Monday-night clash, but also in the points table to break into the top four. They presently have 12 points from 12 games with six wins. With their present rousing run since finishing bottom of the table with one win at the half-way mark, KXIP would like to carry the momentum and finish off the league stage with seven wins in a row. That would leave them with 16 points and a playoff spot.

However, if they lose one more game, things might just get tricky for the Kings XI given their net run rate (NRR) of -0.049. Given the present standings, as many as seven teams are likely to finish with 14 points with the possibility that the top three teams along with KKR can still finish with 16 points hence denying KXIP a playoffs berth.

If NNR is the issue in deciding the playoffs spot that KXIP face a potential threat from SRH (+0.029), who have their remaining three games against Mumbai Indians, Delhi Capitals and Royal Challengers Bangalore. 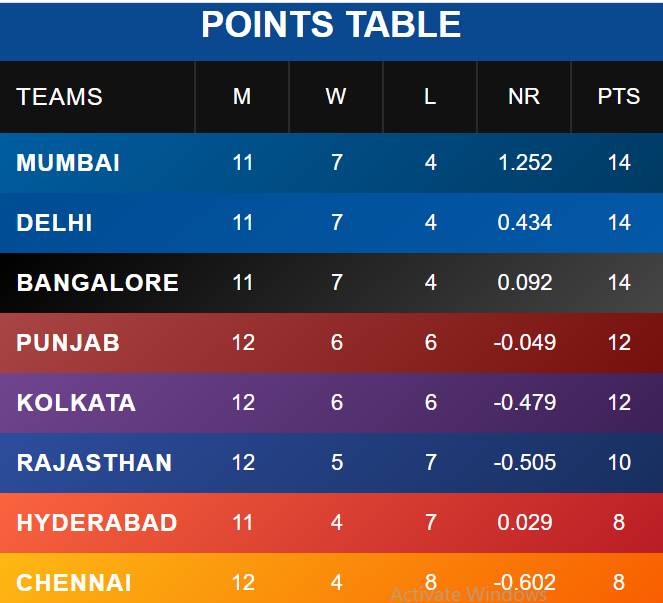 Despite the loss that pushed them out of the top four to the fith spot in the points table, KKR still have the chance to finish the league stage with 16 points and seal a playoffs berth for themselves. Although, their poor NNR implies that they need KXIP to lose at least one more game in this scenario or KKR need to win their remaining two by big margins.

If they lose another game, they will be hoping that other factors fall in place.

With KXIP's win on Monday, one more win for Delhi Capitals could virtually seal the deal for them given that five teams have the possibility of finishing with 16 points and with KKR having a poor NRR, the deal can automatically be sealed for the Capitals. However, they have been rather sluggish in the second half of the league, losing two on the trot and had struggled to win against CSK. If they lose against SRH on Tuesday, it will be of grave concern for the management given they have their last two matches against Mumbai and RCB.

It's a win-all-from-now situation for the SRH from here on. With eight points from 11 games, they can potentially finish with 14 points and then ensure other factors to go their way. What lies in their advantage is their NRR of +0.029 which will help them in the final stages of the league, provided they win their remaining three.