The captain plays a huge role in any fantasy league team as he provides double points on the basis of his performance as compared to others.

The 13th edition of Indian Premier League is around the corner as defending champions Mumbai Indians will take on MS Dhoni's Chennai Super Kings in the opening game. The IPL will witness star Indian cricketers back on the field after a long break due to coronavirus pandemic across the globe. Amidst the pandemic, only five international teams have played competitive cricket - England, West Indies, Ireland, Pakistan and Australia. Fans are eager to see the Indian stars back on the field and IPL is the perfect treat for them in testing time to enjoy their favourite sport in the grand style.

The tournament has shifted to the UAE this season due to surge in coronavirus cases in India. The BCCI has developed a bio-secure bubble for the players to combat the coronavirus crisis.

With the return of IPL, fans will quickly engage in the fantasy league contests, which have gained huge popularity in the last couple of years. There are several websites and mobile apps where people make their playing XI of the match to get more engagement in the match.

The captain plays a huge role in any fantasy league team as he provides double points on the basis of his performance as compared to others. Here we list down the players from each franchise which will be the favourite amongst fans as their captain in the fantasy league contests.

The Bangalore based franchise has Virat Kohli as their captain and he is also the safest bet for anyone to lead their fantasy Playing XI too. RCB doesn't have many big allrounders who can provide points in both batting and bowling, which makes Kohli the obvious choice to be the skipper. AB de Villiers is the other option from RCB as when he gets going there is no stopping for him.

The four-time IPL champions Mumbai Indian are one of the most talked-about sides in fantasy leagues with players like Rohit Sharma, Kieron Pollard, Hardik Pandya, Jasprit Bumrah and Quinton de Kock in their ranks. While Rohit is the leader of the team on the field but Hardik has turned into a safest best for the captaincy spot in fantasy leagues from MI. Hardik gives an advantage of being an all-rounder who has the ability to score quickfire runs with bats and pick 2-3 wickets with the ball. While the other all-rounder in the team Pollard doesn't bowl much which gives Hardik an upper hand.

When you have a player like Andre Russell in the team, then there are very fewer chances that someone picks any other player as their captain in the fantasy league. Dre Russell is one of the Most Valuable Players in the league as he, with the bat, he can do wonders that no-one can and with the ball he can bowl four overs for the team, which gives him chance to pick some wickets too. The other two options for captaincy spot in KKR are Dinesh Karthik and Sunil Narine. Karthik is the captain of KKR on the field and he also provides a good option to be appointed as a skipper in fantasy league due to his batting and wicketkeeping abilities. On the other hand, Narine is one such player, who takes complete advantage of powerplay overs to smash opposition bowlers all over the park and with the ball he still has some mystery with him. 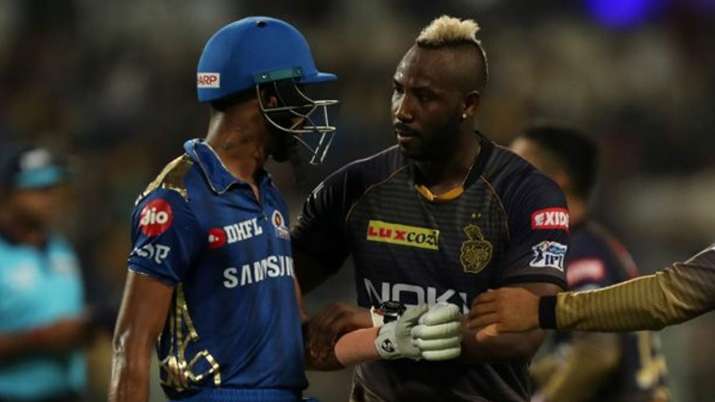 The three-time IPL champions will be without two of their marquee players -Suresh Raina and Harbhajan Singh this year. Their absence will put more pressure on captain MS Dhoni and his men. CSK are still a well-balanced side with quality players in every department but their MVP is still Dhoni. The former India captain is an exceptional player on the field and with him in the fantasy league, everyone gets an advantage of his extraordinary wicket-keeping skills which provided extra points on bonus chart.

KL Rahul has been appointed the new captain of KXIP after the departure of R Ashwin from the team. Rahul has been the most consistent performer for the Mohali franchise in the IPL, but still, Glenn Maxwell holds an edge over him in the fantasy league contests. The Aussie player was in the destructive form during the recently concluded England tour. Apart from the bat, Maxwell is also a handy bowler, who can easily fill up the fifth bowler's spot in the team.

The Jaipur-based franchise relies heavily on their overseas talents - Steve Smith, Jos Buttler, Ben Stokes and Jofra Archer. Apart from these four Rajasthan roped in IPL veteran David Miller in their squad. While Smith leads the team on the field, people prefer Ben Stokes over him in the fantasy leagues. Stokes has already made a huge name for himself by playing astonishing knocks in 2019 WC final and Ashes Test series. The English allrounder leads the team in all three departments which makes him an easy choice for the preferred captain spot.

The rejuvenated Delhi based franchise qualified for the Play-offs for the first time in 2019 after 2012 edition. Delhi Capitals have plethora of young talented players like Prithvi Shaw, Rishabh Pant, Shreyas Iyer and Kagiso Rabada. Iyer has proved to be a strong leader on the field last season but Rishabh Pant remains the fan favourite in the fantasy leagues. Pant has the potential to change the course of the game on his own with his wide range of shots and being the wicketkeeper he gives a slight advantage in fantasy league to gain more points.