Natarajan was at the National Cricket Academy in Bengaluru, recovering from a shoulder niggle.

Indian left-arm pacer T Natarajan on Thursday joined the Indian squad after completing the mandatory quarantine period at the Narendra Modi Stadium in Ahmedabad where the team is presently part of the T20I series against England.

Although, there hasn't been any official communication from the team management, Natarajan posted an Instagram story on his social media handle, sharing a picture with teammate Washington Sundar with the caption, "Great to be back with the Indian team."

Natarajan was at the National Cricket Academy in Bengaluru, recovering from a shoulder niggle. He hence missed the first three T20Is and was also not part of the playing XI for the fourth game of the series. 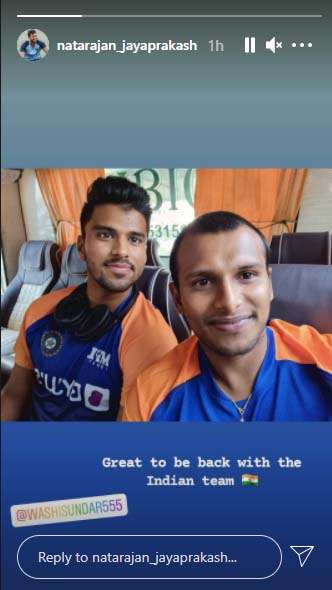 Natarajan, following his impressive IPL 2020 season for Sunrisers Hyderabad in the UAE, made his T20I debut in Australia in December. He picked six wickets in three matches at 13.83 with an economy rate of 6.92.

India presently trail in the T20I series by a 1-2 margin having incurred defeats in the first and the third game, both while defending their total.