The much-awaited second Test in Chennai will see 50 per cent of the crowd capacity to be allowed in the stadium.

A long wait finally comes to an end! After facing nearly year-long hiatus due to coronavirus, a smile would be put on the fans' face as they gear up to witness a sporting event after a delay that seemed no less than being tormented. Cricket is all set to return in its true form, just in a couple of days, with India hosting England in the second Test of the series at the MA Chidambaram Stadium in Chennai.

When the entire world was thrown in a state of turmoil due to coronavirus outbreak -- leading to a pause in sporting events as well -- India skipper Virat Kohli had said that it's difficult to recreate any 'magical moments' without fans. Kohli and Co, looking to get their revenge on a confident English side in the second Test, will have the first-day-of-school feeling on Saturday, with crowds -- perhaps in shades of blue and white -- cheering from the stands.

The much-awaited second Test in Chennai will see 50 per cent of the crowd capacity to be allowed in the stadium. The excitement of fans can be gauged by the fact that all 15,000 tickets for sale were finished within sixty minutes of them going online. However, the sudden return of fans may leave people worried about their safety. To iron out all threats involving coronavirus transmission and not compromising the safety of everyone,

The Tamil Nadu Cricket Association (TNCA) has laid strict measures, which includes setting up of a medical room and an isolation room at the venue. Five medical kiosks have been set up and if any individual is found coughing or sneezing at the stadium, he will be shifted to the isolation room to get medical attention.

Just like norms in cinema halls and theatres, cricket fans will be seated in the stadium with a vacant seat in between them, with CCTV cameras installed to keep a close eye. Furthermore, the stadiums will also have volunteers to check whether all protocols are being followed.

“For the first Test, we had volunteers in all the stands who were returning the ball. Once the ball was returned, it was sanitized by the on-field umpires. The player who got his hand on the ball first was also sanitizing his hand. That will continue,” TNCA secretary RS Ramasaamy told The Times of India.

“We will have volunteers checking whether all the protocols are being followed. If there is trouble, they will let us know and we will deal with it. We will also have a separate crew to monitor the CCTV footage. If they find any issue, they will inform the volunteer in that particular stand,” he added.

TNCA, earlier this week, had also emphasized on people wearing masks and following social distancing within the premises. "Strict disciplinary action will be initiated by authorities against all persons violating covid & security protocols,” said the release. 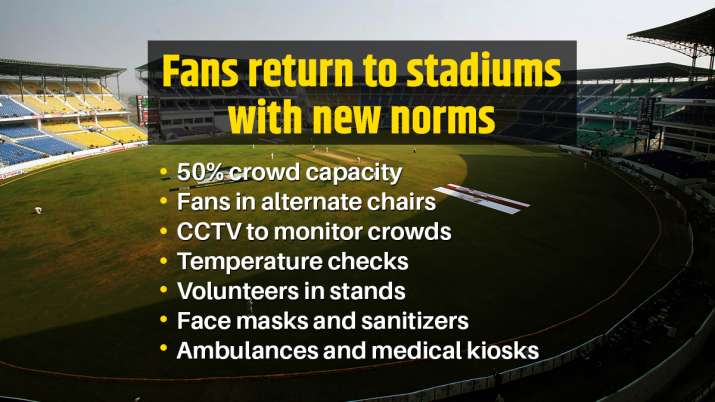 The following set of guidelines were also issued by the TNCA:

1. Face mask, covering mouth and nose, is mandatory for entry into the stadium and maintain social distancing within the stadium premises at all times.

2. Persons showing any symptoms of COVID 19 like – Fever, Cough, Cold etc will be denied entry into the stadium.

4. Promotional/commercial material, ambush marketing in any form, banners & flags displaying patented commercial logos, which in the Association / Organizer view may conflict with the rights of any Official Sponsor of the match will not be allowed into the stadium.

5. Smoking, alcohol and Illegal substances such as narcotics is prohibited.

6. Spectators are cautioned not to indulge or display anti-racist, religious or political activities, foul / abusive / unruly languageinside the stadium, that could disturb the game and such persons will be dealt with in accordance to law.

7. Spectators are not to deposit / handover any of their belongings with any Security Guard / Officials or other Personnel at the gates.

8. Spectators are advised not to dishonour National Flags orNational symbols and those found to do so will be handed over to the Police.