Rohit had actually played a similar shot against Lyon in Sydney as well, albeit successfully to complete his maiden half-century on overseas soil as an opener.

The only talking point from the rain-interrupted day 2 of the Brisbane Test has been Rohit Sharma's dismissal, termed as "reckless" and "irresponsible" by pundits and fans alike. Rohit, who was well settled on 44 off 76 deliveries, laced with six boundaries all against pacers and four of them off Pat Cummins, decided to take on Nathan Lyon, again, but holed out straight to the fielder at long-on.

For Rohit, who has played 34 Tests for India, his manner of dismissals against spinners have been quite the same. Of the 19 times he has been dismissed by this variety, 13 of them have been caught by fielders, 12 of them were not wicketkeepers and in six of them Rohit was well set. In his previous tour to Australia, Rohit, on 37, shimmied down the track looking for the short square boundary, but he was never close to the ball and ended up getting a top-edge which resulted in a catch at deep square leg. In 2016, in the home series against New Zealand, Rohit, on 35 in Kanpur in the first innings, he chipped the straighter ball from Mitchell Santner to the fielder at mid-on. It happened in Southampton as well, in 2014 against England, when Rohit, on 28, looked to attack Moeen Ali, was caught at mid-off five minutes before tea.

The Gabba dismissal on Saturday joined the list and hence drew similar criticism with Sunil Gavaskar left fuming, "Why? Why? Why? That's an unbelievable shot. That's an irresponsible shot."

Rohit did not regret his shot selection and rather explained saying that it was his role in the team.

"I was actually trying to pierce the long-on and that deep square-leg fielder, but it didn't connect the way I would have loved to," Sharma explained. "Pretty simple. It was something I won't regret. It is something I like to do. I like to put the pressure on the bowler once I am in, and that is my role in the team. To make sure I keep putting that pressure on the bowlers because we have seen throughout the series how run-scoring has been difficult for both the teams."

Rohit had actually played a similar shot against Lyon in Sydney as well, albeit successfully. He danced down the track and got close to the pitch of the ball to chip it over mid-wicket, in presence of a long-on, for a boundary that brought up his maiden half-century on overseas soil as an opener. In the first innings of the same Test, Rohit, looking "to put the pressure on the bowler", launched Lyon over long-on for half-a-dozen. 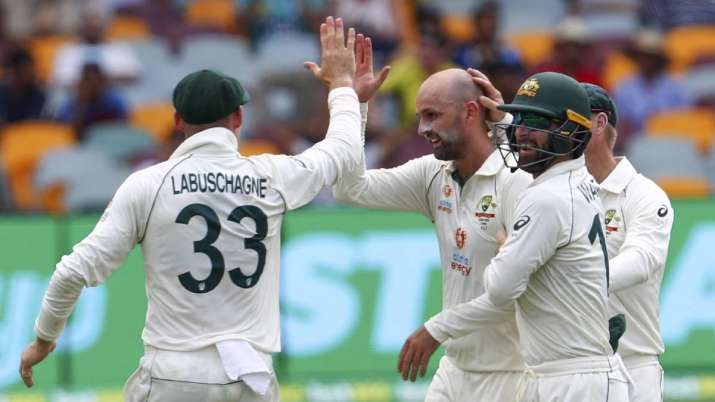 Rohit enjoys taking on spinners. Since his debut, he has scored 1098 runs against the variety at a strike rate of 64.4 and has been dismissed every 89.74 balls while hitting a boundary every 12.54 balls. But Lyon has been the only exception in his impressive numbers against spinners, who has dismissed him six times, the most he has fallen to a bowler in Tests. Against the Aussie, Rohit has scored at 22.5 runs per dismissal and has been dismissed every 43 balls with his boundary rate being 16.12. Lyon further consolidated his position in the rivalry in this series by conceding just 32 runs in 71 balls against the Indian with Rohit managing boundaries every 17.75 balls.

During Rohit's knock, one of the on-air pundits opined that someone like Cheteshwar Pujara and Ajinkya Rahane would think ten times before executing a pull shot unlike the opener. But the pull shot is something Rohit has mastered over the years, which CricViz pointed out during the previous Test that he has scored 223 runs executing 106 such shots while being dismissed only thrice. Some methods and techniques are best suited for a type of batsman, as it is in the case of Pujara and his batting.

The criticism only took the eyes of the sheer brilliance with which he handled the new ball attack from the pacers on day 2, and how he has taken on the Aussie trio in this series. Sanjay Manjrekar had shown on air the adjustments that Rohit made to his batting when facing the pacers - he used to defend the deliveries down the outside-off channel towards extra-cover with a short front-foot stride and a slightly open-faced bat, but he now gets behind the line and plays it towards mid-off.