Is it time for India to look beyond Shikhar Dhawan as T20I opener?

Focus of Indian cricket team has entirely shifted to the preparation for T20 World Cup next year in Australia. However, just like for the previous ICC tournament, India are running out of time to lock in on their final 15 for the tournament. To precise, India have just 11 more international games to go and an entire IPL season to decide on the squad. But unlike their preparation for the 50-over World Cup, one of India's main concern is their top-three combination.

Rohit Sharma, Shikhar Dhawan and Virat Kohli were India’s pride heading to England last summer. The troika was undoubtedly the world’s best top-three combination in ODIs in that four-year space en route to World Cup 2019. They had the most runs, the best average and most hundreds among themselves in the time frame.

The script is nearly not as same in the T20Is.

Since World T20 2016, the same combination has scored the most in the world having played about double the number of matches then second-placed side and have had the second-best average among the 12 Test-playing nations. But in T20Is, the strike rate is given preference keeping the average in perspective. India’s strike rate is the fourth-best overall.

However, when considering India's top-three combination of Dhawan-Rohit-Kohli, the troika has amassed 4239 runs in 137 innings at an average of 33.91 and strike rate of 140.73 since last T20 World Cup. Their strike rate is 2.83 less than table-topper Australia. Overall, India have scored four centuries as well the joint-most alongside New Zealand (three by Rohit and one by KL Rahul) and most fifty-plus scores.

So far India's story in T20Is sounds fine, but the problem lies deeper. Since the last T20 World Cup, India have managed to score at a rate of 7.60 runs per over in the powerplay which implies they amass about 46 runs at the end of the sixth over. It stands seventh on the list of best T20I powerplay run-rates. Both Australia and England score a run more than India in each over of the powerplay. Sri Lanka and Bangladesh too have a better run rate in the powerplay than India.

At the opening slot, India have tried only Rahul apart from the usual two. Dhawan has a tad better strike rate than the other two opening options in the powerplays. All three start at a steady rate and have an almost similar career dot-ball percentage. But while both Rohit and Rahul have the ability to impressively change their gears in the second half of their knock, Dhawan more often than not ends with a run-ball innings.

Rahul has amassed 974 runs in 28 innings for India at an average of 42.34 and strike rate of 145.67 while also registering a boundary percentage of 19.2. And in the 14 times he opened the innings for the nation, he averaged 41.35 at a strike rate of over 140 with a boundary percentage of 18.66. Besides, Rahul was among the top run-getters in the last two IPL seasons with a strike rate of 158.41 in 2018 and 135.38 in 2019. With Rahul opening the innings, Shreyas Iyer and Manish Pandey would have the responsibility of handling the middle-order while leaving the finisher's task for Rishabh Pant and Hardik Pandya. It would also allow India to squeeze in another all-rounder. 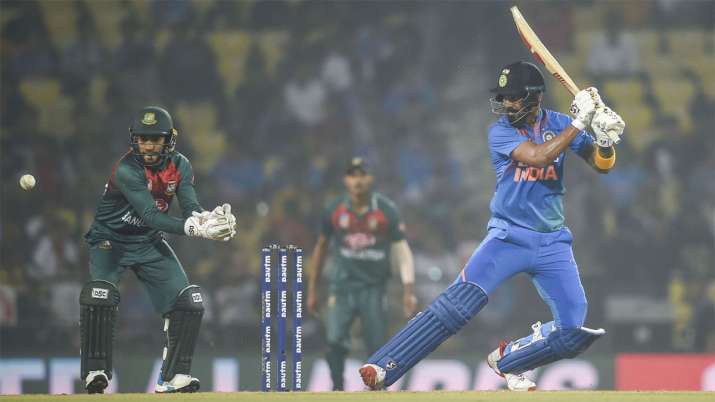 But what if the top-six lineup is kept the same as that in Bangladesh series with Kohli replacing Dhawan? It is not that the skipper is a stranger to the position. He has opened seven times for India in international cricket although scoring just 198 runs at 28.28 with a strike rate of 146.67. Besides, in IPL, Kohli is almost a regular opener for Royal Challengers Bangalore scoring 2245 runs in 55 innings since 2013at an average of 52.21 and a strike rate of 143.63 with five centuries. In fact, his average as a batsman down the order is 36.38. According to Cricbuzz, he has been dismissed 21 times inside powerplay in IPL implying that out of the remaining 34 times he survived on 20 occasions he scored at least a fifty.

India are running out of time. They have 11 more matches to react leaving Dhawan with fewer opportunities to change his tactics and seal his spot.