On this day, Rohit Sharma arrived at the big stage and 'Hitman' still owns it after 13 years

Rohit didn't get the chance to bat in the debut game as he started his career as a middle-order batsman and India won the match against Ireland by 9 wickets.

Exactly 13 years ago, the talented batsman from Mumbai's domestic circuit made his debut for India and later became one of the greatest white-ball players of all time - Rohit Sharma. Team India vice-captain knocked the Team India tour with his consistent show in the domestic circuit and when the Men in Blue, were going through a transitional phase post-2007 World Cup debacle, Rohit Sharma got his chance in India tour of Ireland.

Rohit didn't get the chance to bat in the debut game as he started his career as a middle-order batsman and India won that match by 9 wickets in hand. Chasing a revised target of 171 (DLS) Sourav Ganguly (73) Gautam Gambhir (80) guided India to a comfortable win in the expense of Tendulkar's wicket, who got out on four.

After the tour, Rohit was selected in India's squad for 2007 T20 World Cup squad, which was filled with young players under MS Dhoni's captaincy. Rohit played a crucial knock of 50 off 40 against South Africa in the group stage to lead India to the next round in the tournament. Team India eventually won the inaugural T20 World Cup trophy and Rohit Sharma got some chances in the follow-up series.

In the first final of  2008 CB series against Australia, Rohit proved his worth with 66-run knock and was the hero of India's win in the match alongside great Sachin Tendulkar, who slammed 117 runs. After the series, Rohit didn't live up to the hype due to inconsistent performance.

The gamble of MS Dhoni playing Rohit as an opener in 2013 Champions Trophy rejuvenated his entire career. Rohit who was new to the position maintain his calm in the opening game against South Africa and slammed 65 runs off 81 balls. Team India started the campaign on a high note with a 26-run win over Proteas. MS Dhoni and Co. went onto lift the Champions Trophy title by beating hosts England in final. Rohit scored 177 runs in 5 matches in the winning campaign. The tournament marked the start of something extraordinary - the opening pair of Shikhar Dhawan and Rohit Sharma. In 107 ODIs, the duo has accumulated 4,802 runs and is currently ranked fourth among the highest-scoring opening duos in the history of the game. 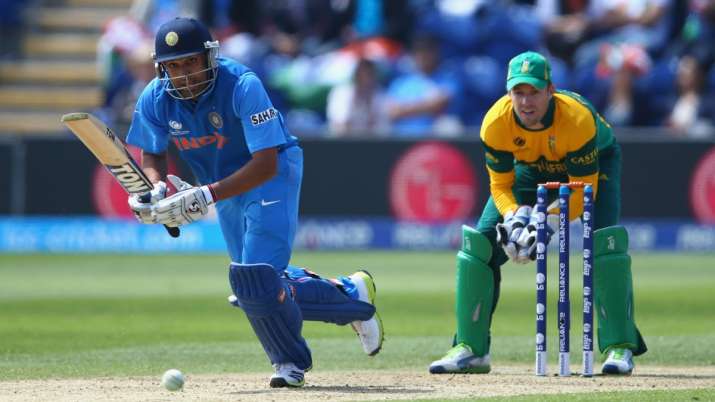 Rohit made a big name for himself in the same year with a double century against Australia. It was November 2, 2013, Team India was playing Australia in the series decider of seven-match series at the flat track of M Chinnaswamy Stadium. Winning the toss, Rohit slammed 209 off 158 balls to become the third Indian after Sachin Tendulkar and Virender Sehwag to hit a double century in ODIs. Rohit's carnage powered India to comfortable 57 run-win.

The Mumbai born took only one more year to slam another double century, this time he ruled Eden Gardens, Kolkata and conquered Sri Lanka with a massive 264-run inning, which a highest individual score in ODI cricket. Rohit struck 33 fours and 9 sixes in his massive innings.

Rohit didn't stop there and he hit his third double ton (208*) at IS Bindra Stadium, Mohali in 2017 against Sri Lanka. It was very special for him as he slammed it on his wedding anniversary in his wife's presence and he was also leading the Indian team in the match.

The golden patch of Rohit's career arrived in the 2019 ODI World Cup. The Hitman became the only player to hit 5 centuries in a single edition of World Cup. India were eliminated in the semifinals of the tournament with a heartbreaking defeat against New Zealand but Rohit ruled the tournament with 648 runs in 9 matches. The 33-year-old also received his maiden ICC ODI player of the year award in the same year.

Apart from his batting prowess, Rohit has also mastered the art of captaincy as he is the most successful captain in Indian Premier League history. The 33-year-old has guided Mumbai Indians to 4 title wins as captain.

Till now, Rohit has played 224 ODI for India, in which he scored 9115 runs with 29 centuries and 43 fifties. The premium opener has also mastered the T20s as he has scored most centuries in the shortest format of the game in the international stage - 4. He is the second-highest run-getter in T20I cricket with 2773 runs in 108 matches.

Rohit also has an impressive record in Test cricket with 2141 runs in 32 matches at an average of 46.54.