Naseem Shah: Pakistan's next export from the pace factory

Nassem Shah, 16, lost his mother a week back and on Wednesday, he became the youngest player to make his Test debut Down Under in the Gabba Test.

Pakistan has always had a thing for young, budding fast bowlers and as they embark on a tough journey in the World Test Championship, they have unearthed another gem, who they believe can tilt things in their favour Down Under. At 16, Naseem Shah is the next big thing in Pakistan cricket and even at this tender age, he has already shown signs of having a mature head and the fire to succeed.

Nassem lost his mother a week ago but on Wednesday, he became the youngest cricketer ever to make his Test debut in Australia and when Pakistan come out to bowl, he is expected to bring the fire at the Gabba.

He, however, has already got plenty of attention thanks to a tour game in Perth, where he tormented the batsmen with his pace and bounce but most importantly, the ability to bounce back from a personal tragedy and still spit fire nonchalantly is what impressed everyone.

For various logistical reasons, the teenager had to stay back in Australia and failed to show up for the funeral but his 1/21 against Australia, with Marcus Harris being the wicket, showed everyone that he is perhaps the next big thing coming from the alleys of Pakistan.

But, who is Naseem? Well! A 16-year-old who has just seven first-class games before making his debut against Australia in the first Test. He was born on February 15, 2003 and three months off his 17th birthday, he is out on the fast lane to take on the big boys. He isn't the youngest to make his debut for Pakistan as that accolade belongs to Aaqib Javed, who was 16 years, 189 days when he played New Zealand in 1989 but perhaps he is the most exciting of the lot and very few players have generated such praise and attention. 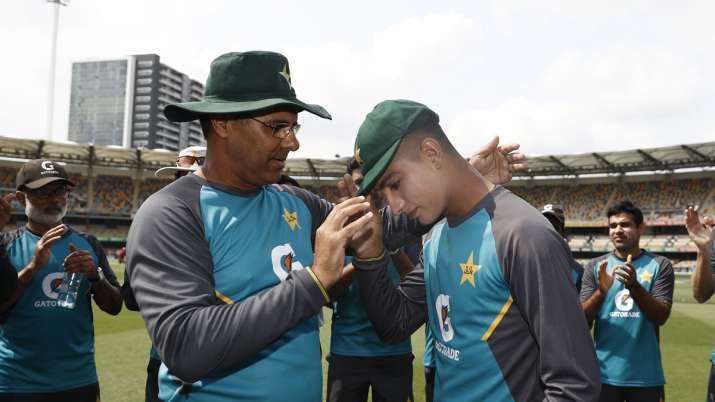 In the 7 first-class games, Shah is managed to take 27 wickets with best match figures of 9/111 playing for Zarai Taraqiati Bank Limited but Pakistan captain Azhar Ali is impressed with his mental strength and control with the ball.

"Obviously, it was a hard time for him, but he coped with it and he came out and bowled the very next day, which is very heartening,” Azhar said on the eve of the first test.

"Not many players can reach (Test) standard so early, but there are exceptions and he’s one of them. When I saw him first, I was so surprised. The control he had, the pace he had, and the temperament and the composure when he bowls is so exciting to see," Azhar said.

Australia also have had a fair look at him with Travis Head and Joe Burns playing in the 'A' game and according to Pat Cummins, he is quick.

"By all reports, he bowls fast, is quite lively and sometimes that's almost better, when you start off a little bit naive. You just want to go out and bowl fast and not be clouded by the baggage of a few long days in the dirt," Cummins said.

He is expected to lead the attack with another youngster in Shaheen Shah Afridi and an experienced head in Imran Khan. But, after being likened to Dennis Lille for his action by coach Waqar Younis and heaps of praise from Cummins and his captain, Naseem's debut is perhaps what will keep everyone glued to the television sets when the visitors take the field to bowl.