On Day 3 of the deciding Test, Broad picked up six wickets in seven overs - which also included the much-questioned five-wicket haul - across two innings to not just single-handedly leave West Indies on the ropes, but also take his career tally to 499 wickets.

"I’ve been frustrated, angry, gutted – because it’s quite a hard decision to understand. I’ve probably bowled the best I’ve ever bowled in the last couple of years. I felt like it was my shirt, having been in the team through the Ashes and going to South Africa and winning there" - a miffed Stuart Broad said after he was dropped from the Southampton game against West Indies at the start of this month.

England were too eager to awe so proudly display their quickest pacers - Jofra Archer and Mark Wood - as part of their playing XI. The move only implied that England had their eyes on the next Ashes Down Under, a welcomed notion by many English veteran cricketers until the afternoon Jason Holder bamboozled the hosts' batting lineup with his record-scripting 6/72 in the first innings. Many also justified the idea questioning - When was the last time Broad picked up a five-wicket haul in Test cricket at home?

Even a few years back, Broad, despite his high career wicket tally, always held a doubt as a future prospect of England's pace bowling lineup. In the 25 Tests he played between 2016 and 2017, Broad picked 78 wickets at 30.21. 45 of those scalps were from the 14 home Tests, coming at 29.88 an average. In both the categories, he was England's second-highest wicket-taker behind James Anderson, clearly implying that the veteran was always the one to rely on. Anderson averaged 14.60 at home in picking 60 wickets in the 13 Tests. The period ended with England's 4-0 humiliation in Australia in the Ashes and management questioned the idea of having Broad alongside Anderson for the next Ashes at home.

But a newer Broad began to take shape on the second morning at the Hagley Oval in March 2018, courtesy, Joe Root's insistence on England's new-ball pair to pitch the ball fuller in length. And in no time New Zealand were four down for 17 runs. Broad, in particular, was transformed. Bowling 30 cms fuller than normal, as measured by CricViz, Broad drew two batters to throw their bats to drive, before striking the front pad of Henry Nicholls dismissing him on an lbw. Had it been the old Broad, the ball the moved back in would have gone over the stumps on ball-tracking, but the fuller-length tactic made the difference.

Root, and even the English crowd at the Adelaide, had earlier insisted him, and Anderson, to swing the ball by pitching it fuller. But both were reluctant in taking the gamble. Fuller lengths imply higher chances of being driven, but there is also a high chance of nicking one behind. Root had stood helplessly at second slip all through the Ashes only in vain to watch his bowlers failing to execute his plan.

Broad had eventually decided to take the gamble. And the numbers showed the difference. From 11 wickets ar 47.73 in the Ashes 2017/18, Broad finished with 11 wickets at 18.55 in the New Zealand tour. And from there on, Broad's career has taken a different path, making a slightly more difference to his length when bowling at home Tests, adjusting the length to 41 cms fuller.

And although many felt that it was a statement of intent by the bowler, Sunday's performance was just another example of Broad's improved tactics. On Day 3 of the deciding Test, Broad picked up six wickets in seven overs - which also included the much-questioned five-wicket haul - across two innings to not just single-handedly leave West Indies on the ropes, but also take his career tally to 499 wickets. 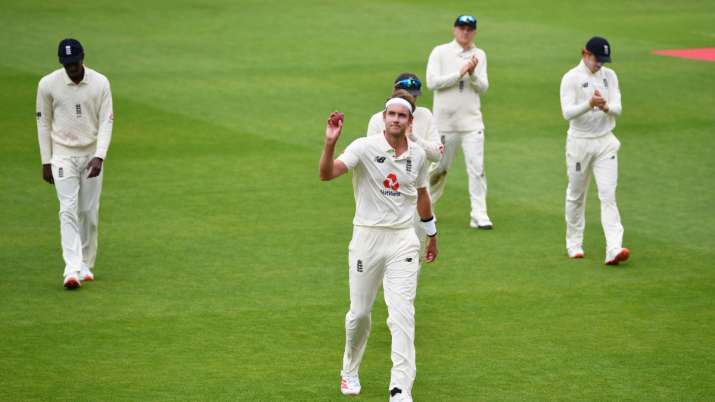 Since that tour of New Zealand, Broad now has 89 wickets in 24 Tests at 23.19 - the most in the world in the period. Moreover, his wickets have come at a price of almost six runs less than Anderson's scalps. At home, Broad has 67 wickets in 15 matches during the period - highest for any England bowler - and at an average only a tad more than Anderson's.

Not just length, another aspect that has been key in Broad's recent success has been his ability to hit the stumps more often than ever. Between 2016 and 2017, 29 per cent of Broad's dismissal were either lbw or bowled, which increased to 53.73 per cent since the tour of New Zealand in 2018. He has, over time, also joined the new bandwagon of bowlers attacking the left-handed batsman from around the wicket which he displayed during the Ashes series at home last summer, harassing David Warner from around the corner. Broad now averages 6.44 against southpaws as against his 19.60 in the period before.

Broad now stands on the verge of joining his teammate Anderson in the 500-wicket club. but not with just another wicket. He deservingly joins the veteran in the elite club after having boldly made his statement in Manchester on Sunday.