Why so serious, Jassi? Yuvraj Singh hilariously asks Jasprit Bumrah to smile as he poses with trophies

Yuvraj Singh had a hilarious reaction to Jasprit Bumrah's serious pose as he posted a picture with trophies after the BCCI awards.

Indian fast bowler Jasprit Bumrah received the highest award in Indian cricket - the Polly Umrigar award for best international cricketer of the year, in the BCCI awards on Sunday. The premier Indian pacer won a trophy and a cheque of Rs. 15 lakh. He was also given the Dilip Sardesai honour for his performances throughout the previous year for the side across the three formats.

Bumrah took to social media to share his delight at winning the awards. He posted a picture with both the trophies on his Instagram profile, writing, "Grateful and honoured to be taking these two awards home tonight."

Former Indian cricketer Yuvraj Singh, however, decided to take a mickey out of Bumrah in the comments over his serious face. He pointed out that Bumrah should smile as 'no one is taking your trophies away!'.

Grateful and honoured to be taking these two awards home tonight. 🏆 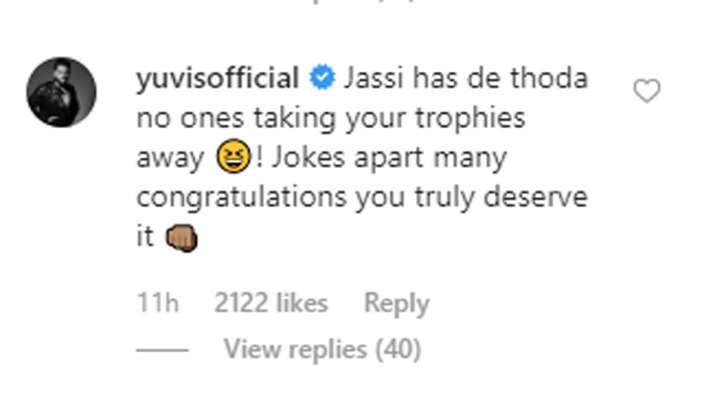 Bumrah played 19 international matches throughout 2019, taking 42 wickets. It also included a hat-trick against West Indies in the second Test of the Carribean tour, aiding India to a 2-0 whitewash in the series.

The Indian pacer was also the side's leading wicket-taker in the 2019 World Cup.

He was ruled out of action after the Test series against West Indies due to stress fracture, and missed the entirety of the home season for the rest of the year. Bumrah made a return to the side earlier this month in the T20I series against Sri Lanka, becoming the country's highest wicket-taker in the shortest format of the game during the final match of the series.