Mayank Agarwal scored his second century in Test cricket with a battling innings against South Africa at the MCA Stadium in Pune.

Before Mayank Agarwal made his Test debut, there was a large cry about why he continues to get ignored by the selectors despite making tons of runs in domestic cricket. However, the continuous snubs didn't deter him and finally when the call came, his application and ability was there to be seen in one of the most challenging scenarios in cricket -- Boxing Day Test at the Melbourne Cricket Ground.

That now seems long gone and the Mayank we see today is no longer the grinder in the dusty, flat grounds of Karnataka and around India. Now, he is India's No.1 Test opener and one that shows no signs of letting his guard down.

If Mayank's twin fifties in Melbourne and Sydney were a sign of things to come, his double century in Visakhapatnam was the perfect example of a modern-day opener, who does it both -- grind and counter-attack.

And, in Pune, he has started from where he left off. 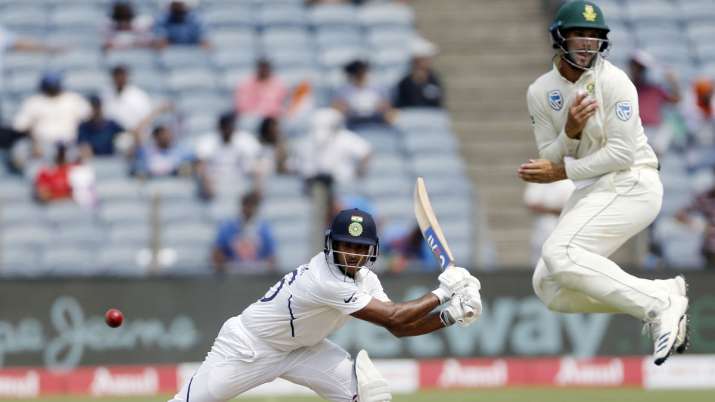 Mayank could actually apply for a trademark of the cover-drive and own it because throughout the series, his drives have been nothing short of exquisite. In the first Test, the 28-year-old smashed two inside-out cover drives for sixes that would make people stand up and applaud. On Thursday, he drived his way out of trouble. Anrich Nortje bounced him, hitting him on his head and the very next ball, he pitched one up and Mayank latched on to it and crunched it through the off-side for a boundary. That showed his confidence and guts and he continued to do so, smacking one every now and then in between the straight batted defences and nudges for a single.

That's the thing about Mayank. He has been in the scene for a while but it was all about the flashy shots and then throwing his wicket away but over the last couple of years, he has become patient and has learnt to settle in and accumulate and it's the maturity that has helped him thrive at the biggest stage. From a dasher to an accumulator, Mayank has slowly become what Rahul Dravid and VVS Laxman used to do and now Cheteshwar Pujara does. Bide his time and get runs. Of course he is a tad more attacking than the other three but the control he has brought to his game is what has made him successful so far in a career that is just six-game-old and filled with a double hundred, a century and fifties.

His impact at the top has helped India as well. Since his debut on December 26 in Melbourne, he has registered 50 plus scores in five of his six innings, out of which one was a double century in Vizag and one in Pune, which he converted into a century. The only instance where he missed out was in North Sound earlier this year against West Indies.

The 108 in Pune added another feather to an already successful yet young career. Full of grit and well-timed shots along with the bumps here and there. It was an epitome of Test cricket. Seeing off the new ball, edging one here and there but hanging in tight and play low-risk shots to get runs. His century came off 183 balls on a pitch that was tricky to begin with but got easier as the day went by... much like his journey to the top of Indian cricket.