As the two teams prepare for the semifinal clash at the Sydney Cricket Ground in Sydney, rain threat looms large with the possibility of even a washout.

The rain gods have been kind it seems towards India on Thursday as the Sydney Cricket Ground remains under cover ahead of the first Women's T20 World Cup semi-final. The toss has been delayed and a no contest would mean that India will progress into the final for topping their group.


The cut-off time for toss is 16:36 local, 11:06 IST and for game to start is 16:51 local, 11:21 IST.​ A minimum of 10-overs-a-side is needed according to the new regulations to have a shortened game. If not, India will make the semi-finals for finishing above England in the points table.​

Accuweather.com shows that there will be constant rain on Thursday and things don't look too bright for England. 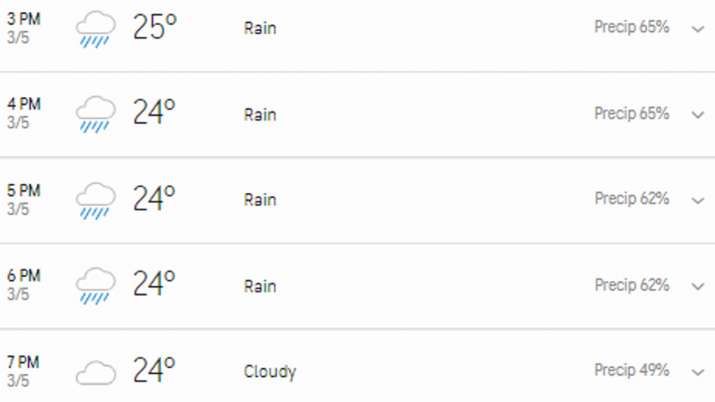 India defeated Australia before thrashing New Zealand, Bangladesh and Sri Lanka to qualify for the semis and finished with eight points. They were, in fact, the only unbeaten team in the group stages, just like in 2018.

However, in the semifinal, they will have to defy history in a bid to make their maiden World T20 final appearance. England have never lost a match against India in World T20 winning all the five games including their 2018 semifinal tie. India will hence hope that skipper Harmanpreet Kaur and Smriti Mandhana fire in the crucial game after running cold in their four games. ​