Besides being the leading run-scorer in T20 Internationals, the HIT-MAN has now become the leading six-hitter in the shortest format of the game.

'HIT-MAN' Rohit Sharma has entered his name in the history books once again as the Team India opener has now become the leading six scorer in T20I cricket, overtaking Chris Gayle's 105 in the shortest format of the game. Rohit achieved the feat in the 2nd T20I of the three-match series against West Indies in Florida. 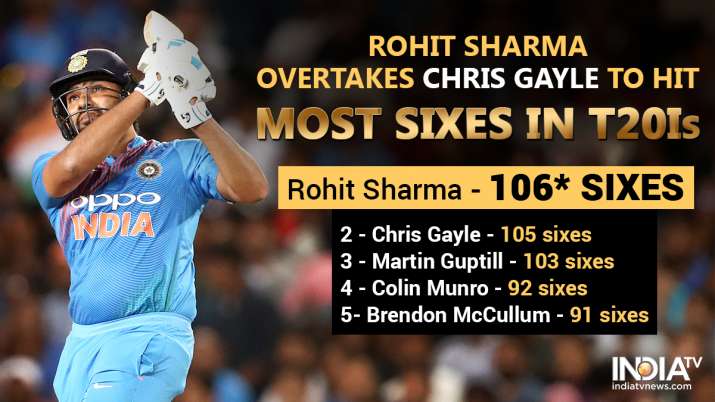 Rohit has now hit 107 sixes so far after putting on a solid 67 before being dismissed by Oshane Thomas.

The 39-year-old West Indian will not be able to add to his sixes tally as he has been rested for the T20Is series against India and will feature in the subsequent ODI series.

Rohit already holds the record for being the highest run-scorer in T20Is. He has amassed 2331 runs so far at an average of 32.37 with four hundreds and 16 half-centuries.

Skipper Virat Kohli attained pole position among Indians in the shortest format across all competitions.On the way to his 28 off 23 balls, Kohli bettered Suresh Raina's record to become the highest run-getter among Indians in T20cricket. Raina held the top spot with 8392 runs, while Kohli entered the game with 8388.

Earlier, India won the toss and opted to bat against West Indies in the second T20I of the three-match series in Florida. The Men in Blue currently lead the series 1-0 after a narrow four-wicket win over the hosts in the opening encounter.

The Indian bowlers came all gun blazing to restrict their opposition at a paltry 95 runs after Kohli decided to bowl first.

Debutant right-arm pacer Navdeep Saini was the pick of the Indian bowlers as he claimed three wickets conceding just 17 runs. The 26-year-old pacer will aim to replicate the show on Sunday and cement his place in the side.

The Indians were also helped by some poor shot selection by the Windies batsmen.