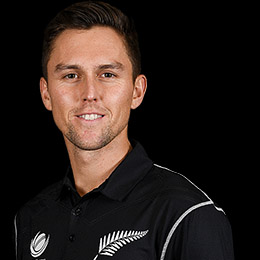 One of Kiwis's best assets in the attacking unit and a pacey left armer with an eye for wickets. He burst onto the scene with his impressive performances in the 2007 New Zealand A tour of India A. He was in and around the New Zealand senior team for a while till he made his Test debut in 2011. He made an instant impact by taking legend Michael Hussey's wicket and helped New Zealand win a Test series in Australia for the first time since 1985. He has collected wickets against West Indies, England, Australia, India and Sri Lanka and has been a Test regular ever since. Known as a silent assasin on the field with his quick swing, Boult has also been a favourite in the lucrative Indian Premier League and has played for franchises such as Sunrisers Hyderabad, Kolkata Knight Riders and Delhi Daredevils. Boult's name is expected to be in the World Cup squad.

2nd Test: Batsmen falter again after bowlers fight back on Day 2 in Christchurch

India could only manage a lead of 97 and have lost 6 second innings wicket after the end of day two's play in the second Test versus New Zealand.

Trent Boult ran through India's top-order and reduced the visitors to 144/4, trailing New Zealand by 39 runs in Wellington.

Trent Boult's 5/21 resigned India to their heaviest ODI defeat in terms of the number of balls remaining.