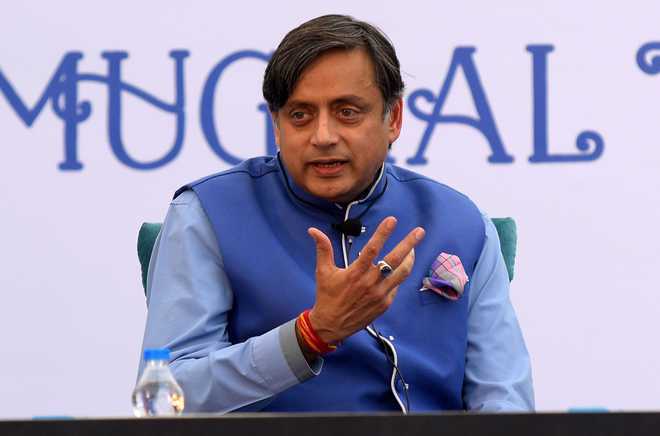 The Delhi High Court on Monday sought Delhi Police's response on a plea by Congress MP Shashi Tharoor seeking direction to it to take steps to preserve the Twitter account and tweets made by his wife Sunanda Pushkar prior to her death in 2014.

Senior Congress leader Shashi Tharoor on Thursday urged Kerala Chief Minister Pinarayi Vijayan to provide an economic package for fishermen in the wake of the coronavirus crisis and implement a special process through which they can continue to go out into the sea to catch fish.

Tharoor in High Court against summons in defamation case

Congress MP Shashi Tharoor has moved the Delhi High Court, challenging a trial court order summoning him in a defamation complaint over his remark that an unnamed RSS leader had compared Prime Minister Narendra Modi to "a scorpion sitting on a Shivling".

Congress leader Shashi Tharoor on Wednesday said the Citizenship Amendment Act (CAA) was against the "the idea of India" and the framers of the Constitution explicitly rejected any idea of citizenship on the basis of religion.

The Congress on Tuesday attacked the government over the UN High Commissioner for Human Rights filing an application in the Supreme Court on the CAA, with senior leader Ahmed Patel saying though it is "unwarranted interference" the Modi dispensation is to be blamed for the "mess".

The viral video where an old lady could be seen talking about Mahatma Gandhi in fluent English was shared by IPS officer Arun Brotha.

"I believe a revived @INCIndia is indispensable to provide a national alternative to the divisive policies of the BJP. This is why the current perception of drift must be ended" Tharoor tweeted

'Vision for a Nation: Paths and Perspectives', edited by Professor Ashish Nandy and Professor Aakash Singh Rathore, was launched in Delhi on Wednesday. This is the first amongst Samruddha Bharat Foundation's 'Rethinking India' series, a set of 14 volumes.

Senior Congress leader Shashi Tharoor has said if the CAA leads to the implementation of the NPR and the NRC, it would be a complete victory for Pakistan's founding father Muhammad Ali Jinnah. He said Jinnah's idea of a country was already winning in India with the contentious Citizenship Amendment Act (CAA) coming into effect, but asserted that there was still a choice available.

Tharoor, who addressed the crowd in Hindi and English said, "Religion was no where mentioned in the Citizenship Act until the BJP-led government incorporated it in the CAA. This is not something we can accept."

The arrest warrant has been filed in a case filed about a novel written by Shashi Tharoor. The complaint says that the novel, by the name 'The great Indian Novel' insults Nair community in Kerala. A woman from the community had filed the complaint.

Senior Congress leader Shashi Tharoor is well known for his knowledge and vocabulary, but this time he has landed himself in a soup. Shashi Tharoor tweeted an incorrect map of India via his Twitter handle. He shared information on protest against Citizenship Amendment Act and posted a wrong picture of the map of India.

Was not paying attention in history classes: Tharoor takes a dig at Shah over partition remark

"I think the imposition of Hindi is simply not going to be accepted by the South, that is something the BJP is already discovering. Similarly, a lot of the Hindutva agenda is not shared south of the Vindhyas," Shashi Tharoor said.

If Citizenship Amendment Bill is passed, it will represent victory of Jinnah's thoughts over Gandhi:

Congress leader Shashi Tharoor on Monday said if the Citizenship (Amendment) Bill is passed by Parliament, it will be a victory of the thoughts of Muhammad Ali Jinnah over Mahatma Gandhi.

Tharoor's remarks came hours after the Union Cabinet gave its nod for the Bill that seeks to provide Indian nationality to Hindus, Christians, Sikhs, Parsis, Jains and Buddhists fleeing persecution in Pakistan, Afghanistan and Bangladesh.

At the upcoming Penguin Annual Lecture, be prepared to be regaled to a captivating conversation between this year's speaker, acclaimed author and philanthropist Sudha Murty, and well-known politician, author and master of words Shashi Tharoor.

Harbhajan Singh has criticised the selection panel after the exclusion of Sanju Samson from the side for the upcoming limited-overs series against West Indies.

P. Chidambaram is in Tihar Jail as the Enforcement Directorate (ED) is probing a money laundering case, pertaining to alleged irregularities in the Foreign Investment Promotion Board (FIPB) clearance to the media group for receiving overseas funds in 2007 when he was the Union Finance Minister.

Special Judge Ajay Kumar Kuhar granted permission to Tharoor to visit Dubai from November 14 to 18. Tharoor had told the court that he was invited there to attend a meeting of Sir Bani Yas Forum

Reading out some portions of the majority view, Chief Justice Gogoi said the petitioners were endeavouring to revive the debate on religion and faith. He added that the apex court should evolve a common policy on religious places like Sabarimala and added that the larger bench will decide the issues relating to Sabarimala, entry of women into mosques and practice of female genital mutilation.