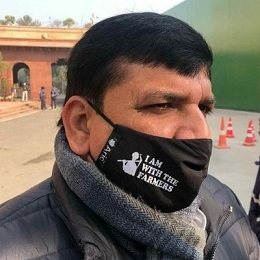 Sanjay Singh is a serving Member of Parliament, Rajya Sabha from Delhi, since 2018. Singh is a senior leader of the Aam Aadmi Party (AAP) and the state-in-charge for Uttar Pradesh, Odisha and Rajasthan. Before entering politics, Singh was known for his involvement in campaigns for rights of street vendors and cleaning of the Gomti river. Sanjay has participated in several important debates including the Rafale deal for which a 5000 crore defamation suit was filed against him by Anil Ambani group Reliance Defence. Singh also raised discrepancies involving the operational One Stop Centres in the country and the respective fund allocations across the states. He has raised concerns related to child deaths due to malnutrition, prevention of child trafficking, stringent punishments for sexual abuse of children amongst others. In 2020, Sanjay Singh was felicitated with the PGC Award by UNICEF India for his efforts. In his term as an MP, he has provided various works to be carried out in his constituency from his MPLADs fund. In 2018, Singh donated one crore rupees from MPLAD along with one month of salary towards the Kerala Flood Relief. Some other development activities undertaken by him include provision of an ambulance in the Rajiv Gandhi Super Speciality Hospital in Delhi, placing street lights and dustbins across Delhi. Sanjay Singh has been a senior leader of the AAP since its inception in November 2012. He is a member of the party's foremost decision-making body, the Political Affairs Committee (PAC). His association with AAP Convener and Delhi Chief Minister Arvind Kejriwal dates back to 2006, when he joined the latter's campaign for Right to Information (RTI). Singh also participated in the 2011 anti-corruption movement led by social activist Anna Hazare. Singh has remained active in the Parliament since 2018 and is known for his bold statements against issues in the country. He is a member of the Standing Committee and Consultative Committee on Urban Development, a member of the Silk Board of India and a member of the Parliamentary Friendship Group on Latin American Countries (LAC). He is a former member of the Standing Committee on Coal and Steel. In the Punjab Assembly election 2017, for which Singh was in charge of the AAP’s Punjab unit, the party won 20 of the state’s 117 seats and emerged as the second-biggest party. This was seen as commendable, as it was the first time the AAP was contesting in a Punjab state election. Later that year, Singh also spearheaded the party’s campaign for civic polls in Uttar Pradesh. During Delhi 2020 elections, Sanjay Singh was made the campaign in-charge along with Pankaj Gupta who was made the campaign director. Singh's parliamentary statistics show his exemplary record in the parliament. He was raised 228 starred and un-starred questions in the parliament and introduced 3 Private Member Bills. Sanjay Singh was born on March 22, 1972 in Uttar Pradesh's Sultanpur district. He currently resides in Delhi with his father, mother, wife and two children. Sanjay Singh holds a diploma in mining engineering from Orissa School of Mining Engineering, Keonjhar.