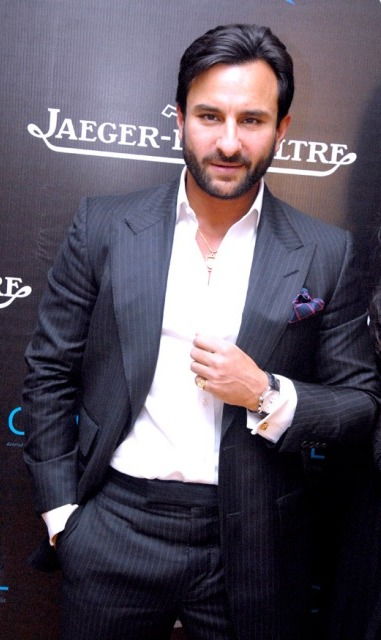 Saif Ali Khan is an Indian film actor and producer. The son of actress Sharmila Tagore and cricketer Mansoor Ali Khan Pataudi, Khan made his acting debut in Yash Chopra's unsuccessful drama Parampara, but achieved success with his roles in the romantic drama Yeh Dillagi and the action film Main Khiladi Tu Anari.

Yash Raj Films' 'Bunty Aur Babli' is returning with its second instalment after a wait of 16 years. The teaser of 'Bunty Aur Babli 2' was released Friday and it has sent the audience into a frenzy. The rib-tickling comedy brings together two sets of con artists who belong to different generations, against each other.

Saif and Kareena, who are fondly called Saifeena by their fans, got married in 2012. On their 9th wedding anniversary take a look at some intimate moments from their special day in this adorable video with wedding pictures.

Described as a film celebrating "the victory of good over evil", Adipurush is an adaptation of the Hindu epic Ramayana featuring Kriti Sanon as Janaki, Prabhas as Lord Ram, Sunny Singh as Laxman and Saif Ali Khan as Lankesh.

Kareena Kapoor revealed she will be discussing LGBTQ with her sons Taimur Ali khan and Jeh. The actress also showered love to her fans from the community, because she believes that they are not 'different.'

While Saif Ali Khan did not clearly mentioned which film of Karan Johar is Ibrahim assisting on, it is said to be the filmmaker's next 'Rocky Aur Rani Ki Prem Kahaani'.

Saif Ali Khan said that Bhoot Police is very close to his heart. The actor's performance has received rave reviews and the critics have praised him for bringing in a different energy to the film and storyline.

Kareena Kapoor Khan is having a romantic vacation on her birthday. She gave her fans a glimpse of Saif from their ongoing beach vacation at an undisclosed location.

Kareena Kapoor Khan is currently holidaying with her family. Taking to her Instagram handle, the actress posted a string of images that captured her many moods, with a surprise picture in the end. Take a look

Not Kareena Kapoor or Saif, Jeh shares uncanny resemblance with THIS family member. Guess who?

Saif Ali Khan's sister Saba posted a childhood picture of Jeh on social media sharing that the newborn shares an uncanny resemblance to a family member. It's neither Kareena nor Taimur. Can you guess who it is?

During a candid question answer session, Archana Puran Singh asked new fathers Saif Ali Khan and host Kapil Sharma about their favourite lullaby that they sing to their children.

Jacqueline shares experience of working in horror-comedy, thriller after release of latest film

Jacqueline Fernandez, who was recently seen in 'Bhoot Police', opened up about her experience of working in horror-comedy and horror-thrillers.

'Teri Meri Baatein' is all set to start with Saif Ali Khan and Arjun Kapoor. They will get together for a candid chat with each other, spilling some exciting beans.

Kareena Kapoor Khan, who is currently holidaying with actor-hubby Saif Ali Khan and kids-Taimur Ali Khan and Jeh, upped her selfie game on Thursday by sharing a drop-dead gorgeous picture from her ongoing dreamy trip. Take a look

Go Goa Gone 2: Will Saif Ali Khan reprise his role in sequel? Here's what actor has to say

Starring Saif Ali Khan, Arjun Kapoor, Yami Gautam, Jacqueline Fernandez, Bhoot Police focuses on two brothers Vibhooti and Chiraunji as they travel in their van throughout the country hunting down and driving away Bhoots, Djinns, Daayans, Churails, and many more.

Starring Saif Ali Khan Arjun Kapoor Yami Gautam Jacqueline Fernandez, Bhoot Police focuses on two brothers Vibhooti and Chiraunji as they travel in their van throughout the country hunting down and driving away Bhoots, Djinns, Daayans, Churails, and many more.

Saif Ali Khan says he is spiritual but not particularly religious. The actor describes himself as “agnostic”, much like his character in the horror-comedy Bhoot Police.