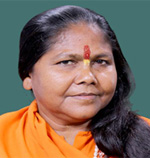 Born on 1st March, 1967 in a farmer’s family at village Patyora (Malihatala), District Hamirpur, Uttar Pradesh (UP). Due to social and spiritual nature since childhood, only at the age of 14, she went to the ashram of Bramhalin Pujya Gurudev Swami Achyutanand ji Maharaj and got initiated and propagated religion in the country under Pujya Yugpurush Mahamandaleshwar Swami Parmanand Giri Ji Maharaj. After becoming a Sannyasin, while following path of her spiritual journey she got formal education upto 12th standard and became active in social life. Niranjan Jyoti, more commonly known as Sadhvi Niranjan Jyoti is a politician belonging to the Bharatiya Janata Party (BJP). She was appointed the Minister of State for Food Processing Industries in November 2014. She represents the Fatehpur constituency, Uttar Pradesh, in the Lok Sabha, after winning in the 2014 general election. She also represents the Hamirpur constituency in the Uttar Pradesh Legislative Assembly after winning in the 2012 election. On 14 June 2014, one man called Bhanu Patel and his three accomplishes fired at Jyoti as she was returning from a function in Avas Vikas Colony, Lucknow. She escaped unhurt but her bodyguard was injured.

Saffron-clad Sadhvi Niranjan Jyoti, a minister in the outgoing Narendra Modi Cabinet, has won from Fatehpur parliamentary constituency in Uttar Pradesh, improving her victory margin this time by over 70,000 votes.

Sadhvi Niranjan Jyoti to be anointed as Mahamandaleshwar today

This comes ahead of the Kumbh Mela, which starts on Tuesday.

New Delhi: BJP President Amit Shah yesterday said the party had taken a strong stand against its leaders indulging in loose talk and the matter was before the party's disciplinary committee.“The party has warned the

Bengaluru:  Facing opposition's ire over controversial remarks made by some of its leaders, the BJP on Saturday made it clear that all party workers should realise their responsibility and not create unnecessary controversies at a

Bengaluru: Congress General Secretary Digvijay Singh today accused Prime Minister Narendra Modi of trying to occupy the “centrestage” of the Congress party with his talk on tolerance and right of minorities, and asked whether “a

New Delhi: In the backdrop of controversial utterances by BJP leaders in recent past, government today said it is taking steps to restrain “fringe” elements who have been making “irresponsible” comments.Union Minister Rajyavardhan Rathore said

Modi working on hidden agenda not for development: Congress

Guwahati: Congress today accused Prime Minister Narendra Modi of working to fulfil the “hidden agenda of spreading religious fanaticism” instead of focusing on development of the country.“In last seven months, no investment has come (to

New Delhi: Union Minister Sadhvi Niranjan Jyoti, whose hate speech kicked up a political storm and stalled Parliament, has been given VIP security.47-year-old Jyoti, who is a Minister of State in Food Processing Ministry, will

Gandhinagar: Union Minister Sadhvi Niranjan Jyoti, who had recently triggered a major controversy with her remarks, today praised Prime Minister Narendra terming him as a ‘yug purush' (man of the era).“I have come to this

New Delhi: Senior BJP leader and former Trilokpuri MLA Sunil Vaid was admitted to a private hospital tonight after he suddenly fell unconscious and collapsed on the stage while delivering his address at the rally

New Delhi: The impasse in the Rajya Sabha over union Minister Sadhvi Niranjan Jyoti's abusive comment continued Monday and there was ruckus as soon as house met for the day.As Deputy Chairman P.J. Kurien tried

Opposition making issue out of non-issue on Sadhvi remarks: Minister

Sadhvi episode should be treated as closed: Sumitra Mahajan

Indore: Lok Sabha Speaker Sumitra Mahajan today said after Prime Minister Narendra Modi's statement over controversial remarks of Union Minister Sadhvi Niranjan Jyoti and her apology, the issue should be treated as closed and the

Kanpur: Union Minister Sadhvi Niranjan Jyoti today refused to comment on the controversy generated by the remarks made by her at a public meeting in Delhi.Jyoti was in the district to visit the house of

New Delhi:  Signalling that it won't back down on Sadhvi Niranjan Jyoti issue, Congress today rejected government's attempts to project her as a ‘poor ignorant village woman belonging to weaker sections” and targetted Prime Minister