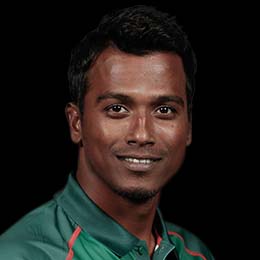 The Bangladesh pacer Rubel leaked 22 runs in the 19th over which helped India to claw their way in the big final of the Nidahas Trophy T20I tri-series in Colombo on Sunday.

Rubel was one of three players, alongside Subhasis Roy and Mahmudullah, to have earned a recall in the Test squad for South Africa tour.

Dhaka: Bangladeshi cricketer Rubel Hossain today got a clean chit in an alleged rape case filed by an aspiring actress as the police, in its final report, sought acquittal of the ‘country's world cup hero'.

Hamilton, New Zealand: Bangladesh coach Upul Hathurasingha says his team's win over England and qualification for their first Cricket World Cup quarterfinals are the result of his players conquering their "fear of failure."Hathurasingha told reporters

Hamilton, New Zealand: The bounce in the step of the Bangladesh players was clearly visible Wednesday as they trained at Seddon Park in preparation for Friday's Cricket World Cup Pool A match against unbeaten New

Dhaka:  Bangladesh cricket star Rubel Hossain got good news along with his match-winning heroics on Monday at the World Cup as a Bangladeshi actress who filed a rape case against him said on Tuesday she

World Cup 2015: Rubel Hossain who became a hero for Bangladesh is out on bail

Adelaide: Bangladesh pace bowler Rubel Hossain is one of the heroes who has etched his name in golden words in the history of Bangladesh cricket after helping his team reach the quarter finals by defeating

New Delhi: History repeats itself! Yes, Bangladesh cricket team have proven this saying after knocking England out of the World Cup 2015.This is the second time in World Cups that the Bangla tigers stunned the

Dhaka: A Dhaka court Wednesday allowed cricketer Rubel Hossain to travel abroad to play in the forthcoming World Cup.The order in this regard was issued in a case filed against Rubel under the Women's Oppression

Dhaka: Bangladesh cricketer Rubel Hossain was Sunday granted bail by a Dhaka court after his previous petition was rejected by the metropolitan magistrate's court in a case filed by model-actress Naznin Akter Happy.Metropolitan sessions court

Dhaka: A Dhaka court has sent Bangladesh cricketer Rubel Hossain to jail after rejecting his bail plea in a breach of promise case under the Women's Repression Act filed by Bengali starlet Naznin Akter Happy.Dhaka