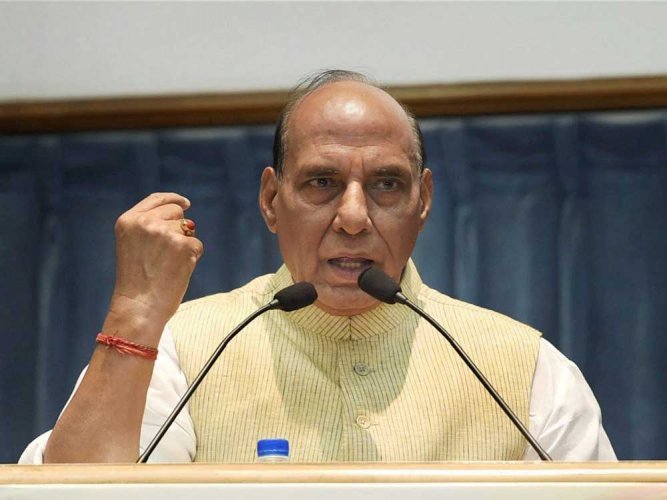 India does not want a war but its soldiers are capable of giving befitting reply if any 'superpower' hurts the country's pride, Defence Minister Rajnath Singh said on Thursday amid the eight-month-old border standoff with China.

No meaningful outcome of India-China talks on Ladakh standoff: Rajnath

Union Defence Minister Rajnath Singh on Wednesday said that no "meaningful solution" has come out of diplomatic and military level talks with China to resolve the standoff along the LAC in eastern Ladakh.

Let farm laws be implemented for two years as an experiment: Rajnath

Greeting farmers on the occassion of Farmers' Day today, Defence Minister Rajnath Singh on Wednesday said that he hopes farmers will end their agitation soon. He said, "Today, on the occasion of Farmers Day, I greet all 'annadaata' of the country. They have provided the country with food security. Some farmers are agitated about agricultural laws. The government is talking to them with full sensitivity. I hope that they will withdraw their movement soon."

Want peace, but won't tolerate any harm to India's self- respect: Rajnath Singh on Indo-China border

Pointing out that rounds of talks have been held at the diplomatic and military levels to solve the issue, the Defence Minister said "let me reiterate, we don't want conflict but peace. But we will not tolerate any harm to the country's self-respect," the Defence Minister asserted.

​Vice Admiral Srikant died due to COVID-19-related complications on Tuesday. The vice admiral, the Navy's senior-most submariner, was due to retire on December 31.

Private firm Envitech has shown interest in acquiring the warship. It wants to convert it into a maritime museum off Goa.

Thousands of farmers, mostly from Punjab and Haryana, are currently staying put at Delhi's borders with Haryana and Uttar Pradesh in protest against the three farm laws.

'Indian forces fought PLA with utmost bravery, forced them to go back'

Defence Minister Rajnath Singh on Monday said India's armed forces stood up to aggression along the Line of Actual Control in eastern Ladakh and fought the Chinese military with "utmost bravery", forcing it to go back.

Bollywood actress Kangana Ranaut on Sunday met Defence Minister Rajnath Singh regarding her upcoming film Tejas. Kangana also informed that they have shared the script of the upcoming film with the Indian Air Force for certain permissions.

Defence Minister Rajnath Singh on Thursday said the country is facing challenges on its borders and will defend its sovereignty and territorial integrity. India and China are engaged in a border dispute for the last seven months in Eastern Ladakh. Despite several rounds of talks between the two countries, the dispute remains unresolved.

US stands with India to defend sovereignty, says Mike Pompeo as he mentions Galwan; irks China

Expressing his country's support for India in its attempt to safeguard its 'sovereignty', Pompeo said that it was evident that the ruling Communist Party in China was 'no friend to democracy'.

'Precision strike': India to get access to US satellite network; two countries to ink BECA deal

The Indian military is set to get access to the giant satellite network of the United States allowing it to target enemy positions with more precision.

US Secretary of State Mike Pompeo arrived in New Delhi on Monday for the third edition of the 2+2 ministerial dialogue to be held in New Delhi tomorrow. The Indian side at the talks will be represented by External Affairs Minister S Jaishankar.