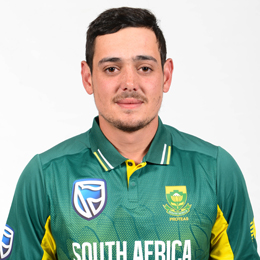 A fierce striker of the cricket ball and an excellent wicketkeeper behind the stumps, Quinton de Kock took the world by a storm when he scored three successive ODI centuries against India in late 2013, that too before he turned 21. Soon drafted into the Test side, he continued his free-flowing style of play in whites giving the Proteas an extra attacking option in their batting. Quinton though couldn't carry his supreme form into the 2015 World Cup beset by injuries but returned stronger to claim his place in the side. Recently, South Africa have tried other options as stumpers in an effort to reignite the fire within De Kock.