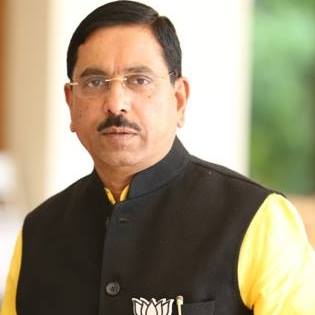 Pralhad Joshi is a member of the 16th Lok Sabha. He represents the Dharwad constituency of Karnataka. He is the ex-president of the Karnataka state unit of the Bharatiya Janata Party (BJP). He is also part of the pool (as of 2014) which helps Lok Sabha Speaker by chairing the house proceedings when both the Speaker and the Deputy Speaker are not present. Pralhad Joshi was re-elected to the Loksabha in the May 2009 General Election in Dharwad constituency. His winning margin was the second highest amongst 28 constituencies of Karnataka. In the year 2014, the elections held for Lok Sabha Joshi was elected for the third time against the sitting MLA Vinay Kulkarni contested from Congress.

During a meeting of parties convened ahead of the Monsoon Session of Parliament, Tamil Nadu-based DMK and AIADMK demanded India intervene in the neighboring country which is facing a debilitating economic crisis.

Joshi had earlier in the day held a review meeting with CMD of Central Coalfields Ltd and other senior officials and carried out a detailed discussion on further increasing coal production and offtake from CCL.

Lok Sabha and Rajya Sabha were adjourned sine die, bringing an end to the session that saw opposition members protest on issues such as price rise and the Lakhimpur Kheri violence.

Pralhad Joshi took a dig at the Congress party and alleged that posters of Late General Bipin Rawat are being used in Uttarakhand by the party to garner votes ahead of assembly polls in the state in 2022.

When the PM asked him what was the need to come to Delhi on foot, he said, if he had not come on foot, he probably would not have met him.

'There won't be a coal shortage,' assures minister amid growing concerns

The government has also asked state-owned Coal India Ltd (CIL) to augment the coal supply to power producers to 1.55-1.6 million tonnes (MT) per day around the Durga Puja period, and to further scale it to 1.7 MT per day after October 20, according to a source.

Rahul Gandhi, earlier on Friday, lashed out at the Centre over the standoff with China.

Union Minister of Parliamentary Affairs, Coal and Mines Pralhad Joshi on Wednesday said he has tested positive for COVID-19 and was under home quarantine.

A day after Congress leader Rahul Gandhi stated that India is being "divided and burnt", Parliamentary Affairs Minister Pralhad Joshi on Thursday said that he used to make "childish" statements.

Bengaluru: Accusing Congress government in Karnataka of showing negligence in unearthing the "conspiracy" behind the brutal murder of a Bajrang Dal activist who was involved in busting illegal slaughter houses at Moodbidri in Mangalore district,

New Delhi: The ruling Bhartiya Janata Party today moved a privilege motion in the Lok Sabha against Robert Vadra, the son-in-law of Congress president Sonia Gandhi, who had criticised the functioning of Parliament in a Facebook post

Siddaramaiah govt has not taken off, says BJP

Bangalore: Slamming the performance of the Siddaramaiah government on completion of one year in office, BJP today called it “a withdrawal government” and said it has not even taken off.“...you (government) lied through the Governor's

Bangalore : Outraged by his ouster within hours of joining the BJP recently, a defiant Sri Rama Sene chief Pramod Muthalik Friday said he was contesting the Lok Sabha polls from Bangalore South and Dharwad

Bangalore:  The AAP Sunday disowned two "fake" candidates claiming to represent the party in Karnataka and said Hemant Kumar was its nominee in the Hubli-Dharwad Lok Sabha constituency."As Kumar is an official candidate from Hubli-Dharwad,

No proposal at present to bring back Yeddyurappa: BJP

Bangalore, May 12: Badly mauled in the Assembly elections, with B S Yeddyurappa doing a significant damage to the party's prospects, the BJP in Karnataka says there is no proposal as of now for the

Belgaum, Apr 5: Jagdish Shettar will continue as the Chief Minister if BJP comes back to power in Karnataka. This was officially announced on Thursday by Karnataka BJP's state president Pralhad Joshi and national vice-president D.V.

New Delhi, Mar 23: Facing a daunting task of leading the ruling BJP in the May five Assembly polls in Karnataka, Lok Sabha member Prahlad Joshi today took over as the state chief admitting that

Karnataka BJP gets new chief ahead of assembly polls