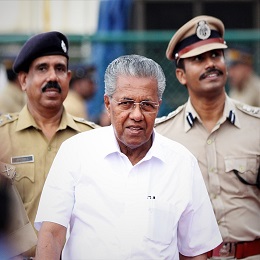 Pinarayi Vijayan (born 24 May 1945) is an Indian politician who is the current Chief Minister of Kerala, in office since 25 May 2016. A member of the Politburo of the Communist Party of India (Marxist), he was the longest-serving secretary of the Kerala State Committee of the CPI(M) from 1998 to 2015. He also served in the government of Kerala as Minister of Electric Power and Co-operatives from 1996 to 1998. Vijayan won a seat in the May 2016 Kerala Legislative Assembly election as the CPI(M) candidate for Dharmadom constituency and was selected as the leader of the Left Democratic Front (LDF) and became the 12th Chief Minister of Kerala.