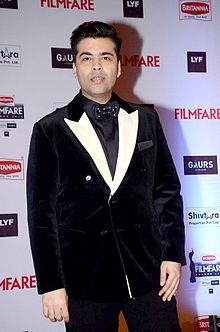 Karan Johar, often informally referred to as KJo, is an Indian film director, producer, screenwriter, costume designer, actor and television personality who works in Hindi films. He is the son of Hiroo Johar and the producer Yash Johar.

Released on October 19, 2012, film 'Student Of The Year' marked 8 years of its release on Monday. The film directed by Karan Johar, stars Alia Bhatt, Varun Dhawan and Sidharth Malhotra in lead roles.

Filmmaker Karan Johar shared a picture with his father and penned down a heartfelt note saying that he misses him and his blessings. The filmmaker wrote that the production house is the result of Yash Johar's "tremendous karma in every sunshine ray" of it.

On Saturday Bollywood actresses Deepika Padukone, Shraddha Kapoor, and Sara Ali Khan were grilled by the NCB. Kshitij Ravi Prasad, a former executive of Johar's production house Dharma Productions has been arrested by the NCB on Saturday.

Karan Johar on alleged drug party video: I do not consume narcotics nor promote such consumption

Karan Johar, in a lengthy statement, said that the allegations are baseless and false. The filmmaker also clarified that reports of Dharma Production executive Kshitij Prasad and Anubhav Chopra being his 'aides', 'close aides' are not true.

The Narcotics Control Bureau has summoned Dharma Productions director and executive producer Kshitij Ravi Prasad for joining the investigations into the drugs cases linked to film personalities being probed by the agency, officials said on Thursday

According to the NCB sources, the agency has begun a probe of a viral video of Bollywood celebrities in connection to Sushant Singh Rajput's death case investigation. NCB Mumbai unit started the investigation. It will examine the veracity of the viral video first.

Shiromani Akali Dal (SAD) leader Manjinder Singh Sirsa filed a fresh complaint to the NCB over the alleged 'drug party' hosted by Karan Johar. The party came to the limelight a year back and was attended by Bollywood biggies including Deepika Padukone, Malaika Arora, Arjun Kapoor, Shahid Kapoor, Vicky Kaushal, Varun Dhawan and others.

In the book, Johar, who became a single father to twins, Yash and Roohi through surrogacy in 2017, explores the challenges every parent faces as well as the differences imposed between boys and girls while raising them.

Onam 2020: Taking to their respective handles, a lot of Indian film personalities right from Amitabh Bachchan and Shilpa Shetty to Mohanlal and Prithviraj Sukumaran shared wishes for their fans on the auspicious occasion.

After the drug link came in Sushant Singh Rajput's case, Netizens recalled Karan Johar’s Bollywood party that caught attention for all the wrong reasons. The bash that was held at the filmmaker's place had various biggies present including--Deepika Padukone, Ranbir Kapoor, Varun Dhawan, Malaika Arora, Vicky Kaushal among others. For those unversed, it was alleged that Johar hosted a star-studded drug party at his residence.

The actress's Twitter team, which goes by the name of Team Kangana Ranaut on Tuesday shared a tweet that spoke about how Gunjan's course-mate at the Udhampur Airforce base was the first woman to fly at the Kargil and not Gunjan and requested the government to take Karan Johar's Padma Shri award back.

Actress Neha Dhupia has reacted to allegations by actress Suchitra Krishnamoorthi that she is a sycophant and the new best friend of filmmaker Karan Johar.

Ranvir Shorey says 'The Gang' exists in Bollywood: Their objective is to control top of the pyramid

Actor Ranvir Shorey took to Twitter to state that the 'gang' exists it Bollywood and comprises of a few powerful names and second-generation producers who want to hold the power over the top of the pyramid.

Karan Johar's private Instagram account initially appeared with username - karanaffairs, but it now seems deactivated or the name has been changed.

While fans were still taking in the news of Amitabh and Abhishek Bachchan testing positive for COVID19, rumours about Neetu Kapoor, son Ranbir Kapoor and filmmaker Karan Johar testing positive for coronavirus broke the internet. Riddhima Kapoor Sahni then took to Instagram to quash such rumours and shared that they all are fit and healthy. This was fake news that was circulating.