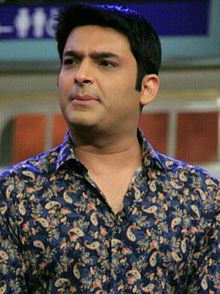 India's most celebrated comedian Kapil Sharma is celebrating his 41st birthday on April 2. Kapil who hosts television's one of the most successful comedy talk shows The Kapil Sharma Show is not just an ace comedian but also a doting father to his little ones, daughter Anayra and son Trishaan. His love for his wife Ginni Chatrath is unmatched and his devotion toward Janak Rani is something we admire. Take a look at these pictures which a proof that Kapil is an amazing family man.

Some of the upcoming biopics and documentaries will train the spotlight on Bollywood's own including Salman Khan, writer duo Salim-Javed, legendary choreographer Saroj Khan, comedian Kapil Sharma and more.

The Kapil Sharma Show is all set to return with a new season. Joining him as the first guests will be the cast of Bhuj: The Pride of India and Bellbottom. Check out some fun BTS pics of the episode.

Kapil Sharma, Disha Patani and others grace the screening of Tiger Shroff's Baaghi 3

One of the much-awaited action-thriller Baaghi 3 starring Tiger Shroff and Shraddha Kapoor released on March 6th. But before the film hit the silver screens, a screening was held that was attended by various celebrities including Kapil Sharma, Disha Patani amongst others. Check out the pictures from the event.

Kapil Sharma, Archana Puran Singh, Kiku Sarda, and others attend the special screening of The Angry Birds. Check out the latest pictures of your favorite Bollywood stars right here!

Can you recognize your favourite The Kapil Sharma Show actor from their throwback pictures?

Kapil Sharma, who is back with a bang with The Kapil Sharma Show, made a suave appearance at the awards night.

Kapil and Ginni tied the knot this month, and their wedding ceremonies followed both the Hindu as well as Sikh traditions.

Actor and star comedian Kapil Sharma got married to his long-time girlfriend Ginni Chatrath on December 12.

Kapil Sharma and Ginni Chatrath: The celebrity couple who remained strong despite all odds

Kapil Sharma and Ginni Chatrath: The celebrity couple which remained strong despite all controversies

Pics: Kapil Sharma is all smiles as he launches the trailer of Firangi

Kapil Sharma starrer Firangi is all set to hit the screens on November 24.

See Pics: When Shahid Kapoor, Kangana Ranaut had a blast on ‘The Kapil Sharma Show’

When Shahid Kapoor, Kangana Ranaut had a blast on ‘The Kapil Sharma Show’