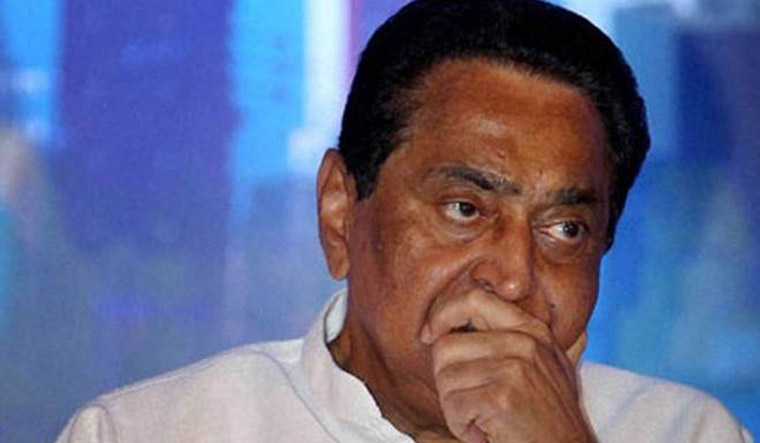 Migrants are being charged for train tickets, alleges Kamal Nath

Senior Congress leader and former Madhya Pradesh chief minister Kamal Nath on Saturday alleged migrants stranded in the coronavirus-induced lockdown were being charged for train tickets, contrary to claims made by the BJP-led governments at the Centre and here.

The much-awaited expansion of the single-member Madhya Pradesh cabinet held on Tuesday after 5 BJP leaders took oath as ministers in the Shivraj Singh Chouhan-led government. The oath was administered by Governor Lalji Tandon.

Former Madhya Pradesh chief minister Kamal Nath has hit out at the Centre's alleging its role in toppling down his government adding the present Shivraj Singh Chouhan has failed to control the rising cases of coronavirus.

A Journalist who attended former Madhya Pradesh chief minister Kamal Nath press conference on March 20 has been found coronavirus positive. It is being learned that his daughter has also tested positive for COVID-19.

Senior BJP leader Shivraj Singh Chouhan may take oath as Maharashtra chief minister for the fourth time on Monday at 9 PM. The oath-taking ceremony will be held at Raj Bhawan in Bhopal

Kamal Nath may quit before floor test on Friday

With the Speaker of the Madhya Pradesh Vidhan Sabha Narmada Prasad Prajapati accepting the resignations of the 16 legislators holed up in Bengaluru, it has become clear the Kamal Nath government will quit on Friday.

​Madhya Pradesh Speaker Narmada Prasad Prajapati on Tuesday has written a letter to Governor Lalji Tandon mentioning that 16 MLAs have gone missing while the legislators who went to Bengaluru issued a video message saying they are safe.

No one has held us captive: Rebel Congress MLAs say their voice not being heard in Kamal Nath govt

The development comes as the Madhya Pradesh Assembly, which met on Monday morning for the Budget session was adjourned immediately after the Governor's address till March 26, in view of the coronavirus outbreak.

Kamal Nath government in Madhya Pradesh has been directed by Governor Lalji Tandon to take the floor test by Tuesday (today), failing which it will be assumed as he doesn't have the numbers. A look at the latest developments in Madhya Pradesh amid crisis situation in the government.

Madhya Pradesh Governor Lalji Tandon has asked chief minister Kamal Nath to face a floor test on Tuesday else it will be considered that he doesn't have the majority in the state assembly.

Getting a reprieve of ten days after the Madhya Pradesh Assembly was adjourned till March 26 amid the demand for holding of a floor test, Chief Minister Kamal Nath on Monday dared the BJP to bring a no-confidence motion against his government.

The Supreme Court on Tuesday will hear BJP's plea seeking an immediate floor test of the Kamal Nath government in Madhya Pradesh after the assembly was adjourned till March 26 over coronavirus threat.

Senior BJP leader Shivraj Singh Chouhan has hit out at Madhya Pradesh chief minister Kamal Nath saying his government has lost the majority and is running away from facing the floor test.

On Sunday, Pankaj Sharma, Kamal Nath's media advisor, claimed that 9 BJP MLAs will support Congress during the floor test of the Assembly. Sources said the rebel Congress MLAs on Sunday yet again sent their resignations from Bengaluru, demanding the Assembly Speaker to approve it.