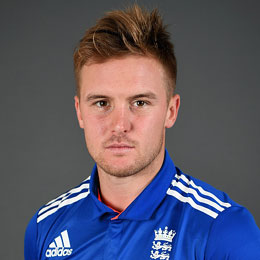 In the backdrop of England's poor batting show in the 2015 World Cup, jointly hosted by Australia and New Zealand, Jason Roy became the protagonist of the battle. While most of the leading English men appeared struggling, Roy made the best of his adventurous approach. Having made his ODI debut against Ireland at Dublin in May 2015, Roy's maiden ODI ton came against Pakistan in Dubai, just before the World Cup. However, he played his best cricket under the leadership of Dublin-born Eoin Morgan, who advocated a free-spirited cricket approach. The Durban-born right scored his ODI-best knock of 180 runs against Australia in Melbourne in January 2018. Having played his first T20I against India at Birmingham in September 2014, Roy is yet to make his Test debut.

Opener Jason Roy smashed his way to a sensational 153 as England scripted a dominating performance to hammer Bangladesh by 106 runs in a high-scoring World Cup match on Saturday.