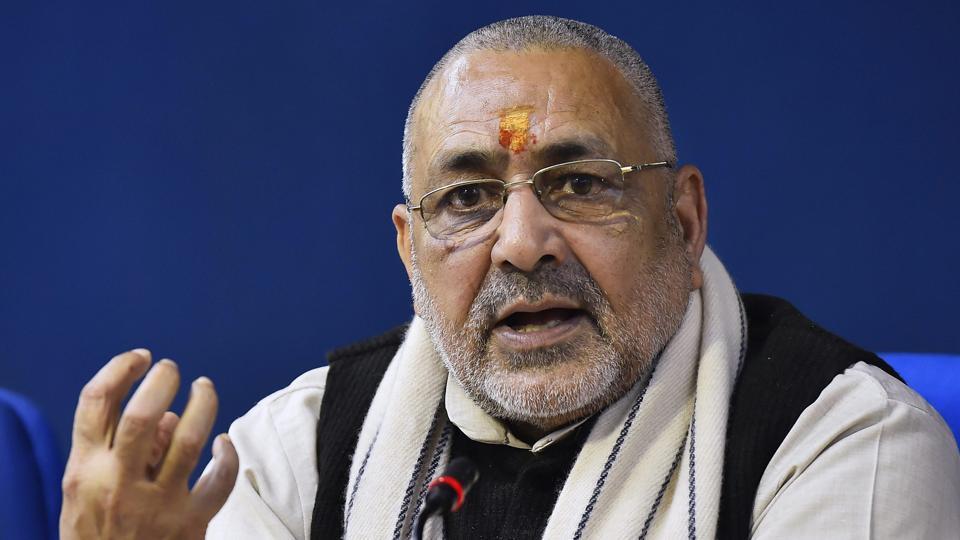 Giriraj Singh is the current Minister of State (Independent Charge) for Micro, Small and Medium Enterprises in the Government of India. He is the Member of Parliament from the Nawada parliamentary constituency in the 16th Lok Sabha, and formerly served as Minister of Cooperative, Animal Husbandry and Fisheries Resource Development in the Government of Bihar.

“I came to know that the Lucknow District Magistrate has banned the sale of meat in the district. I request district magistrates to consult with the Indian government before issuing any advisory on coronavirus,” said Union minister Giriraj Singh

Union minister Giriraj Singh on Thursday stoked a fresh controversy alleging that children who study in missionary schools lack "sanskaar" and end up in practices like "beef-eating" when they go abroad.

A personal assistant of Union minister Giriraj Singh has lodged a complaint with police here that the mobile phone through which the fiery BJP leader operates his social media platforms and accesses his emails, has got stolen, police said on Thursday.

Rahul courted controversy over his "rape in India" remark at an election rally in Godda, Jharkhand, which led to ruckus in Parliament. The BJP had sought apology from Rahul for making that statement.

Union Minister Giriraj Singh took to Twitter to attack Rahul Gandhi on Saturday for the statement he made during Bharat Bachao rally in the capital.

Without naming the chief minister, Singh said: "I am from the ruling party, don't know what to say."

Singh is the Member of Parliament from the Begusarai parliamentary constituency in the 17th Lok Sabha. This time he defeated Kanhaiya Kumar of the JNU fame from there.

Singh, who has been repeatedly criticising the Bihar government for its "inept" handling of water-logging in several parts of Patna following heavy rainfall, sought the forgiveness of 'Sanatani' (devout) Hindus for the adverse impact of the "man-made" disaster on Durga Puja festivities.

Union minister Giriraj Singh, shared a graphic on his official Twitter handle on World Population Day which showed that India's population grew by a staggering 366 per cent between 1947 and 2019 as against only 113 per cent rise in sparsely populated US.

Union Minister Giriraj Singh on Thursday claimed that India is heading towards partition due to increasing population. He added that a law should be introduced to control increase in population.

In the coming five years the native cows will match the standards of international breeds, said Minister of Animal Husbandry, Dairying and Fisheries Giriraj Singh in the Lok Sabha detailing efforts being made by the Modi government under Rashtra Gokul Mission.

"Those who are opposing the bill to ban triple talaq in the name of Muslims and religion are doing injustice to our sisters (the Muslim women)," the BJP leader said.

Mamata's treatment to her political opponents remind us of King Jong-un: Giriraj Singh

"She has been displaying contempt for the country's federal structure. She has said that she refuses to acknowledge Narendra Modi was the Prime Minister of India and has never attended meetings of the Niti Aayog where Chief Ministers of all states turn up," he said.

Union minister Giriraj Singh on Tuesday mocked his NDA colleagues Nitish Kumar and Ram Vilas Paswan for attending 'iftaar' parties, drawing sharp reactions from them that prompted BJP president Amit Shah to step in to douse the fire by admonishing the fiery Hindutva leader and asking him to avoid making such comments.

Amit Shah admonishes Giriraj Singh for Iftaar tweet, asks him to refrain from making such remarks

BJP president Amit Shah on Tuesday rebuked Union minister Giriraj Singh for his snide tweet targeting NDA leaders in Bihar on their presence in 'Iftar' parties and asked him to refrain from making such remarks, party sources said.

Giriraj Singh, notorious for ordering critics of the BJP to go to Pakistan, is the Minister for Animal Husbandry, Dairy and Fisheries in PM Modi's new cabinet. He won the election from Begusarai in Bihar over a strong Kanhaiya Kumar.

Begusarai is one of the 40 Lok Sabha constituencies in Bihar. The district lies on the northern bank of river Ganga. Begusarai had traditionally been a communist stronghold and was once referred to as the "Leningrad of Bihar".

Country has finally rejected those involved in politics of dynasty, regionalism and casteism: Giriraj Singh

Election trends, on Thursday, are showing that the BJP-led NDA is all set to sweep Bihar. Counting of votes is underway. Results are expected to come out in the next few hours.